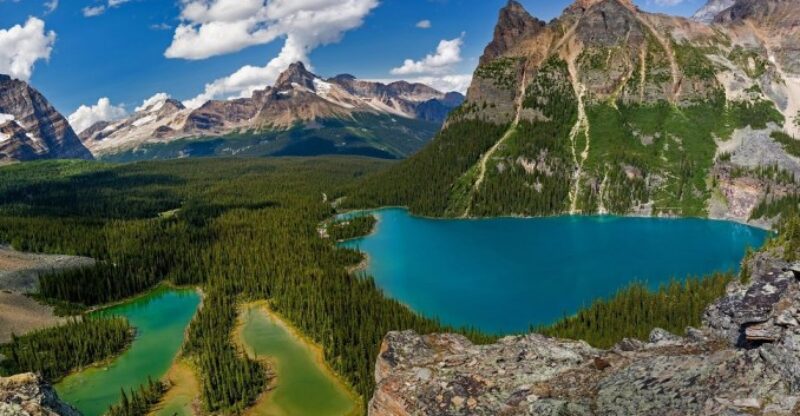 The most rewarding travel experiences are often done on foot. Our planet has a vast array of hiking trails to explore, some of them crisscrossing breathtaking scenery, awe-inspiring culture, or protected wildlife habitats. Here’s the roundup of my 10 favorite day hikes in the world, which all require a sturdy pair of walking boots, a fit condition, and a good amount of preparation.

Taktsang Lhakhang – which translates to “Tiger’s Nest” – is Bhutan’s most iconic landmark, clinging impossibly to a sheer cliff face 900 m (2955 ft) above the valley floor. The temple is cloaked in myth, illustrating the sacred tales of Guru Padmasambhava, the source of Buddhism in Bhutan.

Legend has it that the Guru flew from Tibet on the back of a mystical tigress and landed on a steep cliff to meditate in a cave. In the late 17th century, the monastery was constructed around the cave by Gyalse Tenzin Rabgye, who was universally believed to be the reincarnation of the Guru. The complex is open to visitors and can be reached by a four-hour scenic hike through a beautiful, shady pine forest.

Trolltunga is no doubt one of the most awe-inspiring cliffs in Norway, situated about 1100 m (3280 ft) above sea level and hovering some 700 m (2300 ft) above Lake Ringedalsvatnet. At the western edge of the Hardangervidda mountain plateau and near the town of Odda, Trolltunga (the troll’s tongue) and the valley below was carved out by an icecap that covered most of Scandinavia during a series of ice ages.

Every year, travelers from all over the world come here to do the hike and get a picture of themselves on or in front of the world-famous cliff. The hike is long and demanding both physically and mentally, but you will be rewarded with magnificent views.

The incredibly scenic Kalalau trail runs for 11 mi (18 km) along our planet’s most spectacular stretch of coastline: the Na Pali Coast on the Hawaiian island of Kauai. It provides the only land access to the legendary Kalalau Valley. Expert hikers can complete the roundtrip trek in a day, but the average hiker prefers to camp along the trail and complete it in 2 days.

Most people on the trail though are day hikers that don’t ever make it all the way out to Kalalau, only exploring the scenic first 2 mi (3 km) of the trail, from Kee Beach to Hanakapiai Beach (4 mi or 6 km round trip). Take care though as some of the trail’s eroded areas are very narrow and pass along cliffs that are hundreds of feet high.

Flat-topped Table Mountain is the most iconic landmark of Cape Town, and it’s also Africa’s most photographed attraction. From the top, you can enjoy tremendous 360-degree views of the city, Table Bay, the Atlantic seaboard, the nearby mountain peaks, and the rest of the Table Mountain National Park.

There are more than 300 trails up and down the mountain, with my favorite being the Skeleton George hike. Starting in the Kirstenbosch Gardens, the Skeleton Gorge hike takes you through the shaded, indigenous forest up the eastern slopes of Table Mountain, and summits at Maclear’s Beacon, the highest point on Table Mountain, 1086 m  (3562 ft) above sea level.

“Fimmvörðuháls” is the most beautiful hiking trail in Iceland and a great destination for people into photography. Located in South Iceland, the 25 km (15 mi) hike is part of the highly popular, multi-day Laugavegur trail, and runs between the Eyjafjallajokull and Myrdalsjokull Glaciers. The trail recently received worldwide attention after a Fimmvörðuháls eruption was caused by the infamous Eyjafjallajokull Volcano.

At Fimmvörðuháls Pass, hikers can now marvel at two volcanic craters — Magni and Móði — that formed in the wake of the March 2010 eruption. With grassy tundra, volcanic plateaus, and over 26 waterfalls, the Fimmvorduhals trail leads hikers through Iceland’s most striking nature.

Rising nearly 1500 m (5,000 ft) above Yosemite Valley and 2700 m (8,800 ft) above sea level, Half Dome is Yosemite’s most iconic attraction, but it is also the most sought after which is why this is the only day hike in the park that requires a permit.

Much of the hike is an adventure into the wilderness, with steel cables and wooden planks placed along the trail’s final stretch to assist hikers to the dome’s summit. Most hikers take 10 to 12 hours to hike to Half Dome and back; some take longer. Do not hike Half Dome unprepared: despite the popularity of this famous hike, it is not suitable for novice or unfit hikers.

The Tongariro Alpine Crossing is heralded as the best one-day hike in New Zealand and the world. Many who complete the 7-8 hour, 20 km (12 mi) journey will tell you the climbs can be steep and the weather unpredictable, though worth it in every aspect.

Located within Argentina’s Los Glaciares National Park, Laguna de Los Tres is one of the most iconic hikes in South America. The trail, like much of Los Glaciers National Park, can be easily accessed from the charming town of El Chaltén in the heart of Argentinian Patagonia.

This hike is also known as Fitz Roy Trek because the path will lead you through spectacular scenery to the classic viewpoint of Mount Fitz Roy towering above the lake. This 24 km (15 mile) hike will take most of the day and is moderately challenging, but within reach of most casual hikers if you start early and take it slowly.

This little-known gem in Yoho National Park harbors some of the planet’s most visually stunning scenery. This exclusive mountain enclave and grizzly bear sanctuary feature exquisite hanging valleys, lichen-covered rocks, jewel-blue lakes, and breathtaking vistas. The Alpine Circuit is boasted by many to be the most impressive day hike in the Rockies.

The area is only accessible through a bus service that is run by Parks Canada (you need to prebook your ticket months in advance) and the number of visitors that are allowed into the valley is severely restricted to protect the mountain fauna and flora.

The Dolomites is a UNESCO World Heritage Site in the northern Italian Alps, numbering 18 peaks that rise to above 3,000 m (10,000 ft). It features some of the most beautiful mountain landscapes anywhere on the planet, with vertical walls, sheer cliffs, and a high density of narrow, deep, and long valleys.

The hike around Tre Cime Di Lavaredo – The Three Peaks – is one of the most iconic hikes in the world and for good reason as the scenery is otherworldly: beyond the inviting paths and massive sandstone monoliths which give Tre Cime its name, hundreds of jagged peaks, framed by lush green valleys, dot the horizon.