Top 10 most impressive ruins and archaeological sites in the world.

There’s something utterly magical about exploring the ruins of an ancient place where sophisticated and mysterious cultures once flourished before fading away. Several cultural and religious sites around the world either withstood the test of time or have been excavated, and remain standing as iconic monuments for globetrotters to marvel at. From century-old temples in Greece to pre-Columbian cities in Mexico, here’s my pick for the 10 most fascinating archaeological sites and legendary ruins that you need to put on your bucket list.

With a history spanning 4,500 years, the archaeological site of Stonehenge has many different meanings to people today. Its ring of standing stones is a masterpiece of engineering, and building it would have taken huge effort from hundreds of well-organized people using only simple tools and technologies. The purpose of the ruins is unknown to us. It has no obvious practical purpose. It was not lived in and could not have been defended so there must have been a spiritual reason why Neolithic and Bronze Age people put so much effort into building it. It has been suggested that Stonehenge has been a burial ground from its earliest beginnings. The monument and its surroundings were added to UNESCO’s list of World Heritage Sites in 1986.

You might also like: 5 UNESCO sites in South-East Asia you haven’t heard of (and 1 you definitely have)

The Great Wall is an awe-inspiring feat of ancient defensive architecture. Its winding path over rugged country and steep mountains take in some great scenery. The wall was continuously built from the 3rd century BC to the 17th century AD on the northern border of the country as the great military defense project of successive Chinese Empires, with a total length of more than 20,000 km (12,000 mi). The Great Wall begins in the east at Shanhaiguan in Hebei province and ends at Jiayuguan in Gansu province to the west. Its main body consists of walls, horse tracks, watch towers, and shelters on the wall, and includes several impressive fortresses and passes. Due to natural erosion and human damage, about 2000 km (1200 mi) of the Great Wall has disappeared or turned into a ruin.

Moai statues are massive megaliths on Chile’s Easter Island, and these are what this island in the Pacific Ocean is famous for. The moais were built in approximately 1400 – 1650 ZD by the natives of this island also known as Rapa Nui. There are around 1000 statues, up to 86 tons in weight and 10 m (33 ft) in height, though the average is around half of that. 95% of the moais were carved from the volcano Rano Raraku. This location was chosen since it consists to a great extent of tuff, compressed volcanic ash which is easy to carve as the natives had no metal to carve with but used only stone tools (the so-called toki). Moai statues were built to honor chieftains or other important people who had passed away. That aliens made the moai statues is a quite common belief.

Home to dozens of ancient pre-Columbian cities built over thousands of years by a series of sophisticated civilizations, Mexico boasts arguably the finest and most diverse collection of archaeological sites on the American continent. The most visited and probably the most famous ruin is Chichen Itza, a Mayan city in the state of Yucatan, roughly half-way between Merida and Cancun. The enormous site covers about 10.4 sq km (4 sq miles), though the central core area is much smaller and easily visited. The center is dominated by El Castillo, a Mesoamerican step-pyramid that was built sometime between the 9th and 12th centuries CE and served as a temple to the god Kukulkan. Chichen Itza was awarded the title “World heritage site” by “UNESCO” in 1988.

The greatest and finest sanctuary of ancient Athens, dedicated primarily to its patron, the goddess Athena, dominates the center of the modern city from the rocky crag known as the Acropolis. The most celebrated myths of ancient Athens, its greatest religious festivals, earliest cults, and several decisive events in the city’s history are all connected to this sacred precinct. The monuments of the Acropolis stand in harmony with their natural setting. These unique masterpieces of ancient architecture combine different orders and styles of Classical art in a most innovative manner and have influenced art and culture for many centuries. The Acropolis is the most accurate reflection of the splendor, power, and wealth of Athens at its greatest peak, the golden age of Perikles (5th century BC).

Located just outside the outskirts of Cairo on the esplanade known as the Giza Plateau, the Great Pyramids of Giza is Egypt’s most famous archaeological site. All three of Giza’s famed pyramids and their elaborate burial complexes were built during a frenetic period of construction, from roughly 2550 to 2490 BC by pharaohs Khufu, Khafre, and Menkaure. Egypt’s pharaohs were expected to become gods in the afterlife. To prepare for the next world they built temples to the gods and gargantuan pyramid tombs for themselves – filled with all the things each ruler would need to guide and sustain himself in the next world. Each pyramid is part of a much larger complex, including a palace, temples, solar boat pits, and other features. The site also includes the remains of many smaller temples and settlements, which are invaluable for understanding ancient Egyptian life in this area.

Petra – also known as the rose-red city – is one of the world’s most famous archaeological sites and Jordan’s greatest tourist attraction. It is not known precisely when Petra was built, but the city began to prosper as the capital of the Nabataean Empire from the 1st century BC, which grew rich through trade in frankincense, myrrh, and spices. Petra was later annexed to the Roman Empire and continued to thrive until a large earthquake destroyed much of the city in the 4th century AD. The earthquake combined with changes in trade routes eventually led to the downfall of the city which was ultimately abandoned. In 1812 a Swiss explorer named Johannes Burckhardt rediscovered Petra, after which the site began attracting visitors and continues to do so today.

Tikal is Guatemala’s most famous landmark and the largest excavated site in the Americas, comprising some of the most fascinating archaeological sites of the ancient Maya civilization. Most of the site’s buildings were constructed during the eighth century AD when Tikal became the greatest city in the Maya world with a population of perhaps 100,000. The ceremonial center contains superb temples and palaces, and public squares accessed by means of ramps. Remains of dwellings are scattered throughout the surrounding jungle. Remarkably, Hernan Cortes, the conqueror of Mexico, marched by Tikal in 1525, but they failed to see its temples concealed by silk, cotton, cedar, and mahogany trees. It wasn’t until 1848 that an expedition sent out by the Guatemalan government discovered the ruins.

Angkor Wat, a UNESCO World Heritage Site, is Asia’s most famous archeological site and the principal drawcard to the Kingdom of Cambodia for many savvy tourists from around the globe. Angkor stood once at the center of the mighty Khmer empire (9th to 15th century) and grew to become the largest known pre-industrial settlement, spanning a site roughly equivalent to nowadays Paris. It was believed that the Khmer king had a divine role, and an appropriate temple had to be constructed by each king to consecrate the symbolic relationship between ruler and divinity. The site comprises dozens of iconic temples, including Angkor Wat itself (with its world-famous silhouette, best observed at sunrise); Bayon (a temple famous for its smiling, serene faces carved onto gigantic towers), and Ta Prohm (a magnificent temple ruin engulfed by the jungle).

At the top of a mountain, enormous and imposing stone blocks joined without using mortar were combined to create one of the most important religious, political, and cultural centers of the Inca empire: the mist-shrouded citadel of Machu Picchu. Revealed to the world in 1911 by Hiram Bingham, this Inca city is divided into two large sectors: the agricultural sector, with an extensive network of terraces; and the urban sector, with fine structures including the Sun Temple. The intensely green terraces and the imposing mountains surrounding the site combine to create a stunning landscape which surpasses visitors’ expectations. No matter how many times you have seen a photograph of the iconic Inca ruins, nothing prepares you for the sense of awe that this magical place elicits in its Andes mountain setting, clinging as it does to rock and jungle. 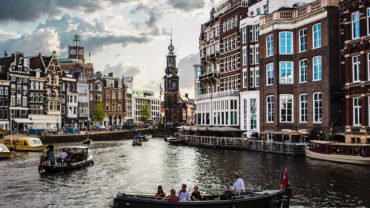