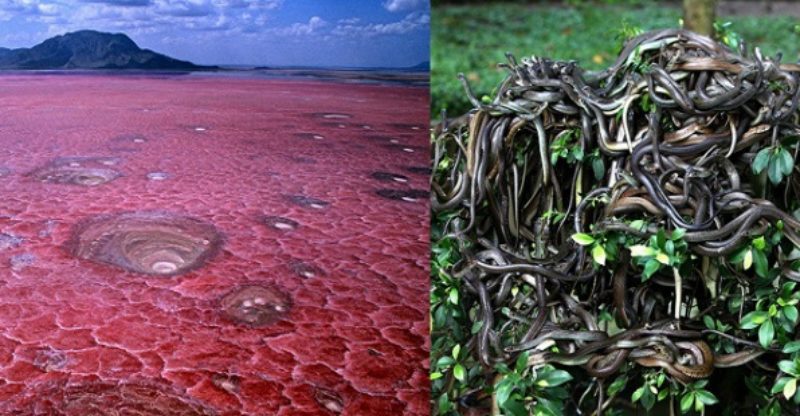 Whether closed to the public or open to the most adventurous among us, these 9 places are the most dangerous in the world!

Perhaps you are one of those crazy people who like to jump off a cliff, smile at the idea of a roller coaster, push the accelerator pedal as far as possible or go solo in remote regions? Whether it’s a natural penchant for adrenaline, an attraction to risk and novelty or a quest for extremes to make you feel alive, your thirst for danger has no limits? We thought of you! Did you know that our planet is full of dangerous places that will perfectly satisfy your insatiable need for dopamine?

More or less accessible, they will awaken your desires for thrills. For those who have a weak stomach, dizziness, fear of speed or a particular taste for the routine, it is better to go your way. Discover 9 of the most dangerous places in the world. 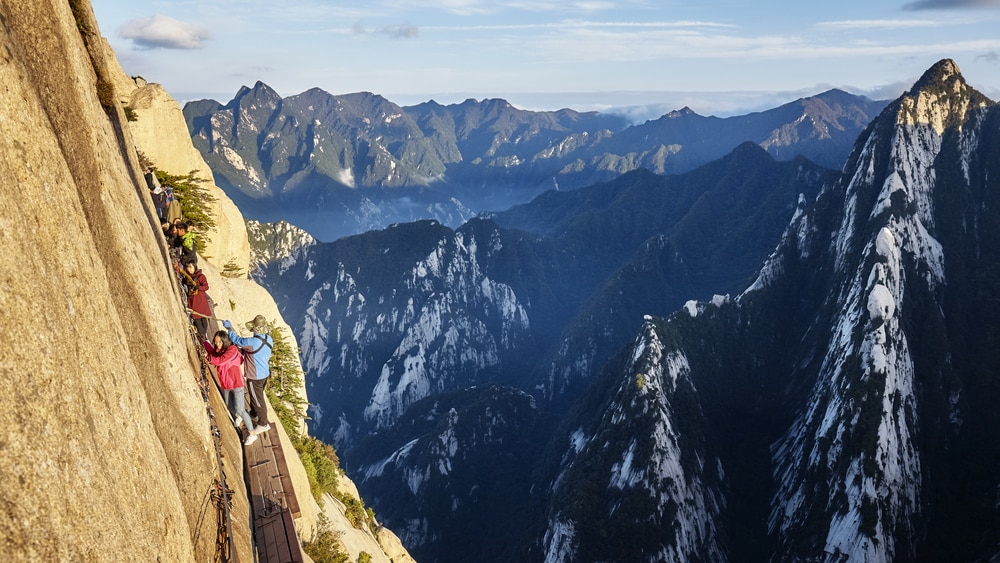 This sacred Chinese mountain is systematically on the list of the most dangerous places in the world!

Leave the urban madness of big Chinese cities to win the mythical sides of this sharp and sacred mountain. Do you see the microscopic paths dug in the cliff? These miserable wooden planks are strewn with branches that serve as hiking trails? Are we talking about these installations feverishly suspended at an altitude of over 2,000 meters? These stairs, carved in the rock, are entirely vertical? Well, that’s it!

Of course, if you survive this climb for a few hours, you will have seen landscapes and had absolutely unique panoramas! 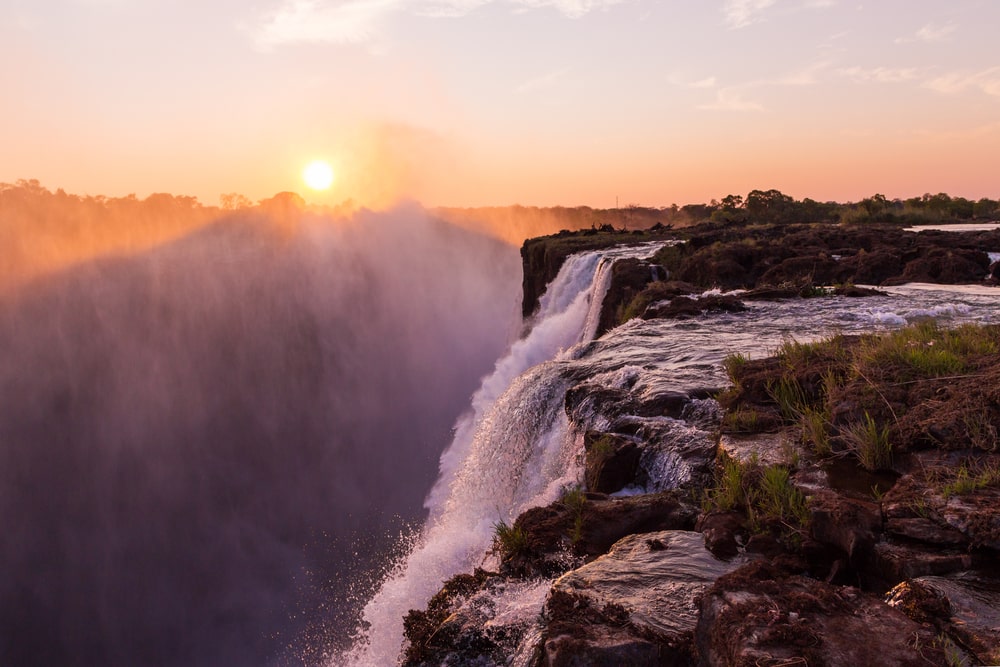 Our second dangerous place is at the top of Victoria Falls, on the border of Zimbabwe and Zambia. It is the devil’s pool that brings you to the edge of a precipice over a hundred meters high. Admittedly, it’s high, but it’s above all torrential! The volume of water can go up in the blink of an eye and potentially lead to a fatal plunge.

Alias, the Road to Death! At least there is no doubt that it is one of the most dangerous places in the world! The idea? Cycle down an extremely vertiginous path carved out of the Bolivian cliffs for three hours by bike.

You start at 4750 meters above sea level and finish at 1200 meters. Then you go from five to twenty-five degrees. Then, you go at 70 km/h. The trail measures just over three meters. Below, the clouds cover the valley and the mist sometimes blocks the landscape. The road turns, narrows, the notches, and the wet ground surprises you.

You brush against the void, try to keep control on your handlebars while your fingers are frozen and above all, you must stay focused at all times. A second of inattention and you dive in, joining thousands of daredevils who have not had a second chance.

4. The gate to hell, Turkmenistan 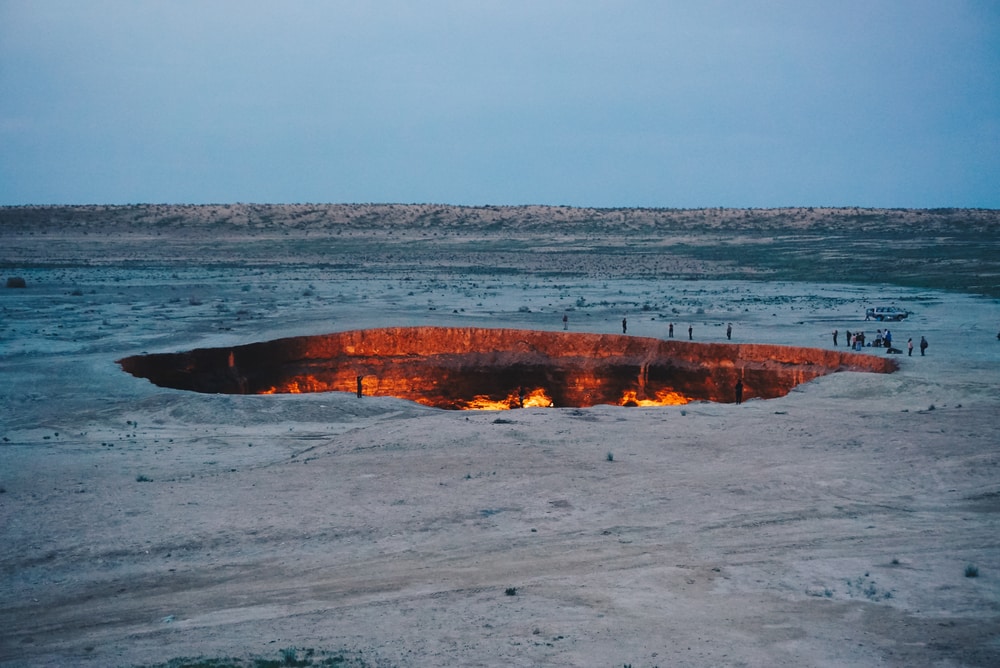 This small, landlocked republic in Central Asia is known for its incredible gas crater located near the village of Darvaza. It is one of the most dangerous and fascinating places at the same time. Indeed, it is a crater, constantly spitting fire, placed in the middle of the desert! The light emanating from it is so bright that this “door to hell” can be seen for miles.

If you get too close to the glowing precipice, before you die charred at the bottom of the hole because the sand will have crumbled under your feet, it may be a gust of scorching wind that will have burned you on the spot. But if your guide (no, you’re not going there alone) is clever enough to allow you to approach the crater a little more, you will be stunned by the tireless, licking flames, the rock, by the thump at the bottom of the hole and by the smell of sulfur. 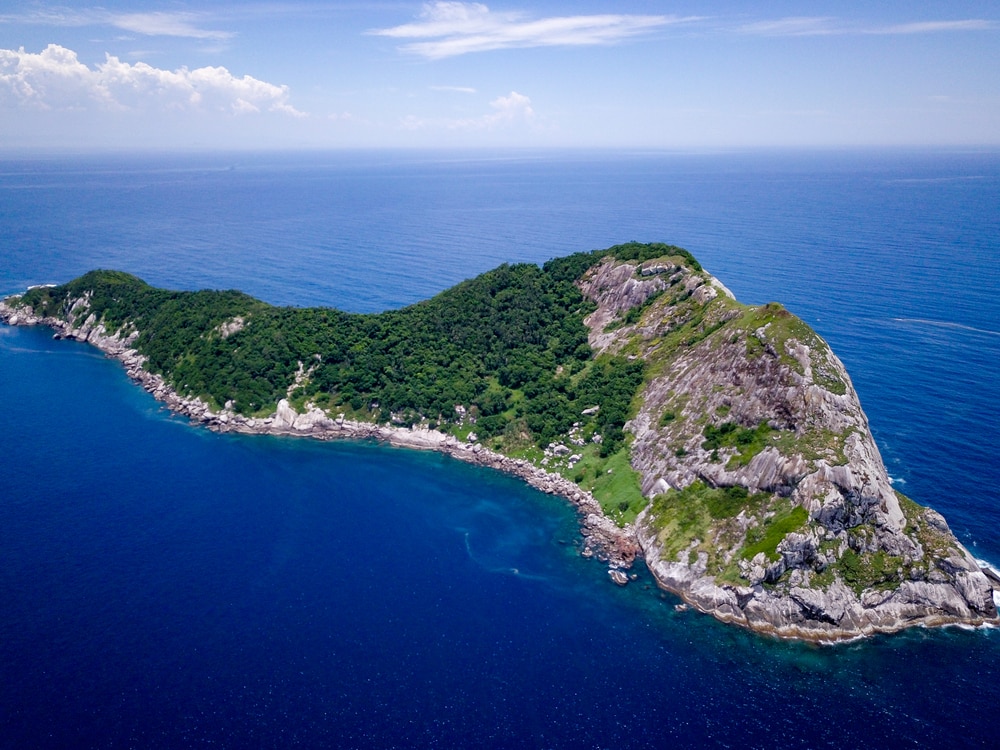 It will take strong nerves to enter this scary and very inhospitable place! Welcome, or not, to the Island of Queimada Grande…

This little green setting peacefully set off the Brazilian coast is indeed one of the most dangerous places in the world. She is invaded by snakes! But no harmless snakes, no, no! It is infested with Jararaca-ilhoa: THE most venomous viper in the world. A bite and an hour later, you’re out of this world. The venom of these snakes is downright capable of dissolving human flesh.

So, let’s be clear, unless you are a world-renowned biologist or scientist, you will never be allowed to put a toe on this island. 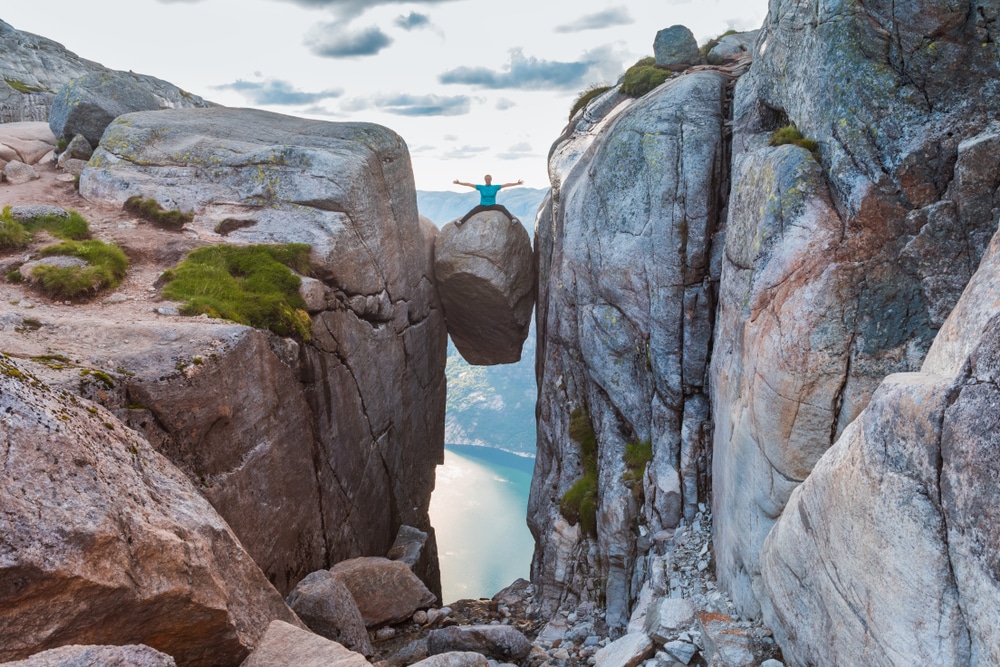 Rise on a rock suspended almost by magic above a bottomless fjord? Normal! The Kjerag rock is an emblem of Norway. But also one of the dangerous places on our list! Before accessing it, you must first endure a daunting hike. From the start, you have to climb in the rocks, sometimes in the company of drizzle or snow making the walls particularly slippery. At the end of the path: the famous Kjerag rock.

Barely higher than you, this stone is just wedged between two cliffs. On the left, a waterfall, on the right, a breathtaking natural fjord that slides to the horizon, below, the void, the void, the void. As is the tradition among the most daring: climb on this ridiculous rock and thus remain suspended in nothingness, with certainly in the background a spectacular landscape 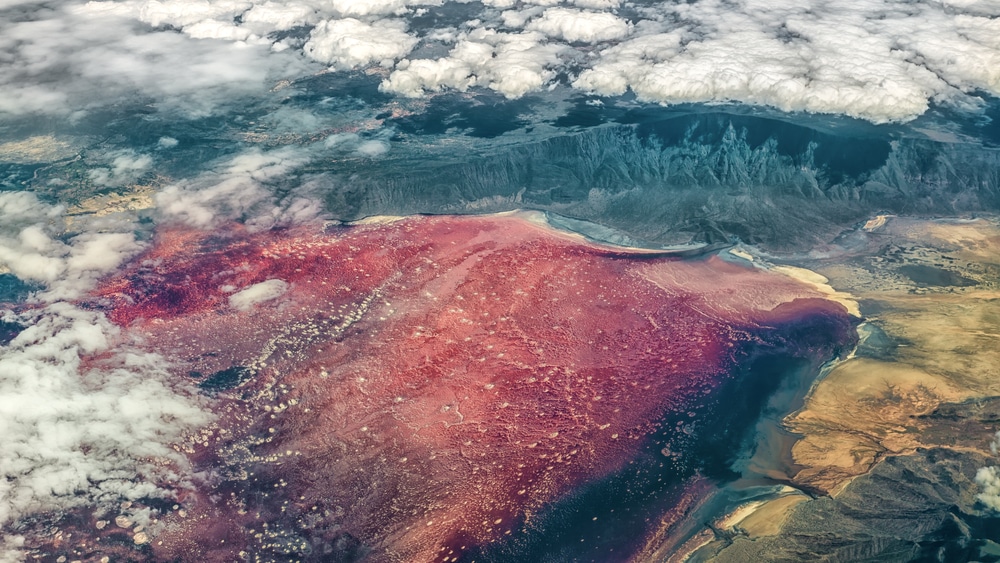 It is pink, it hovers in the heart of one of the most beautiful natural reserves in the world but it is a real ornithological cemetery! Lake Natron in Tanzania is one of the most dangerous places in the world, for humans and animals. Only three species can survive there. Why ? Because this lake has the distinction of being salty and extremely alkaline. Its pH is almost equivalent to that of ammonia. At the slightest touch, the water inflicts excruciating pain and literally petrifies the body.

This is why, when the level drops, we can observe corpses of calcified birds, frozen in time and in the smallest details. Not to mention the unbearable odors of sulfur that emanate constantly. So who’s hot for a swim? 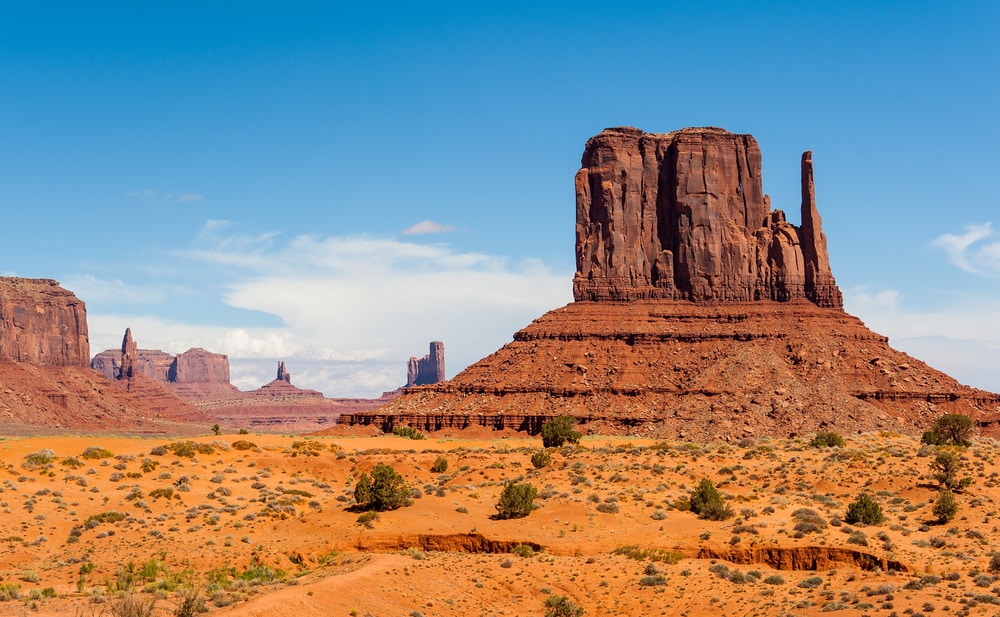 West of American is a must-do destination for road trip enthusiasts. Each year many travelers tread its almost lunar landscapes and its monumental geological formations. We do not imagine that it is among the dangerous places on the planet.

However, even if the Valley of Death is on the classic routes, keep in mind that its name is not a coincidence! It still owes this morbid name to its particularly inhospitable characteristics for humans and most animal species.

This desert valley holds the record for the highest temperature ever recorded on Earth: almost 57 degrees! So, who’s ready to stop by the side of the road and take a little digestive walk in the oven corridor ? 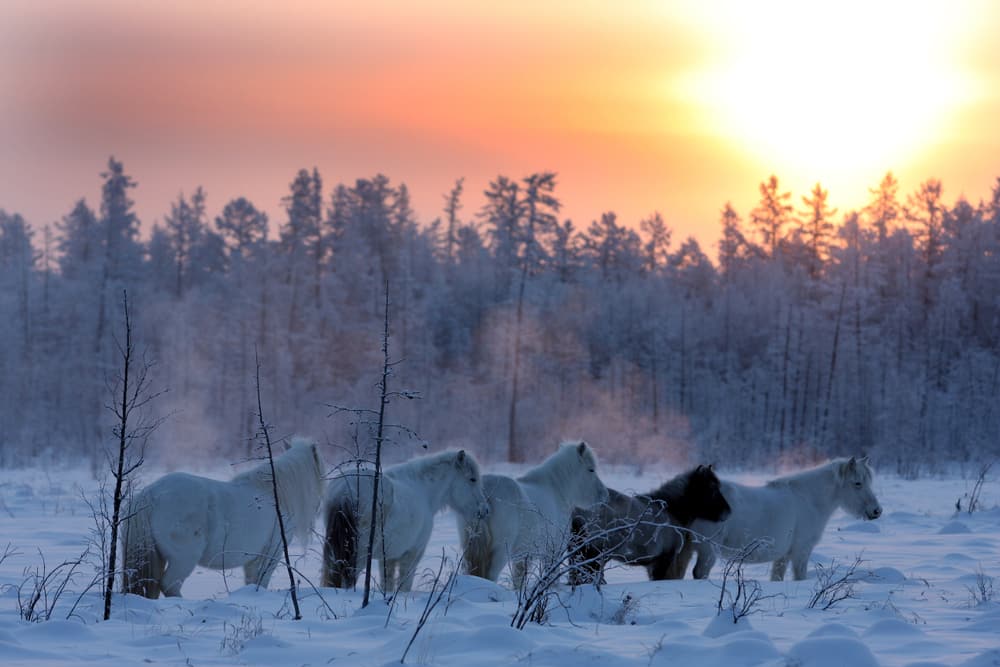 Now here is the coldest city in the world. Suffice to say that we are not going there for a honeymoon or a relaxing vacation. As soon as you step off the plane, you are greeted by a -50 degree Celsius!

In fact, you just have to imagine a whole world built in your freezer. Even worse ! The air burns, the cold cuts, the jaws stand still, the whole landscape is frozen in the ice, nothing is buried because of frozen ground up to two hundred and fifty meters deep. However, if you are a bit agoraphobic, in preparation for Everest or passionate about pristine landscapes, there is no doubt that you will love the latter of dangerous places.

Let us know, do you think you will ever visit one of these places? 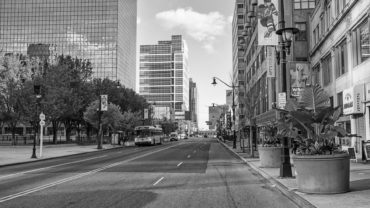