Are you thinking about going to Colombo one day? Discover the essential things to do in the capital of Sri Lanka!

Colombo, the economic lung of Sri Lanka, is the country’s largest city by number of inhabitants. It is thanks to its privileged geographical position, with its natural port in particular, that the city has been for two millennia a crossroads of maritime trade between Europe, the Middle East and Asia.

Colombo is steeped in the diversity of cultures and civilizations that have stopped there. Today, it is the economic heart of the country, with the presence of numerous activities of all kinds (concert halls, museums, restaurants, company headquarters, etc.).

Visiting Colombo is setting off on a memorable journey through different eras of Sri Lankan history.

Are you ready to visit Colombo? Here are the 8 essential things to do in Colombo!

What to do in Colombo for art and culture lovers? The National Museum is ideal to start your dive into Sri Lankan culture, it will not fail to make you travel through all the eras of the country’s history!

Founded in 1876 by the British Governor of Sri Lanka (former British colony), the Colombo National Museum is the largest museum in the country. It houses a large collection of works that will allow you to retrace the history of the country, before and during the colonial period.

It contains real treasures of Sri Lankan culture of the past, as well as historical gems belonging to the ancient royal family. Finally, the museum has a fine collection of demon masks from the ancient period.

If you want to stroll around the museum, Viharamahadevi Park is the ideal place. The largest green space in the city, it is the site of numerous events and various activities (concerts, festivals, public events, etc.). 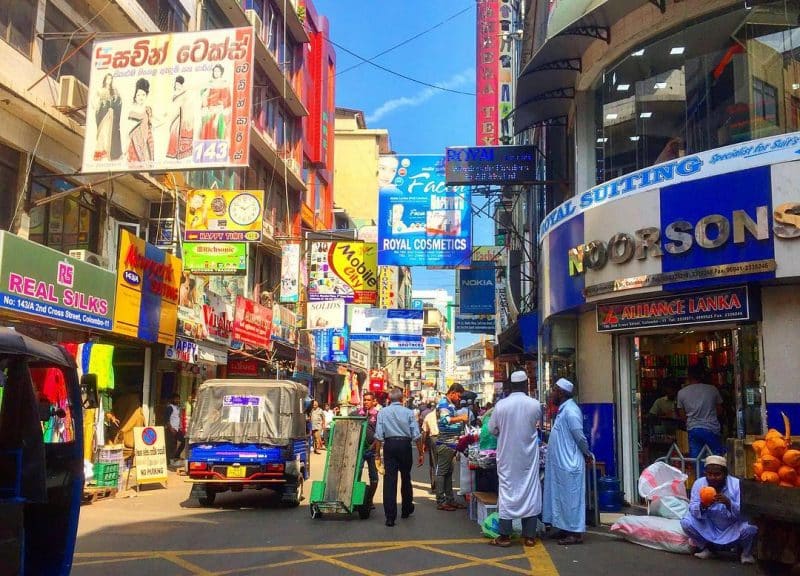 Let yourself be carried away by the crowd wandering through these old streets, where food stalls rub shoulders with craft shops. You can also enjoy historic monuments such as Wolvendaal Church or the Jami-Ul-Alfar Mosque.

Do not hesitate to browse the aisles of the various markets in the neighborhood to taste fresh fruits and vegetables, as well as local specialties. Among the markets to see absolutely, during a gastronomic visit, Manning Market, Central Market or The Federation of Self Employees Market.

Another attraction to do in Colombo and in this district: the Museum of the Dutch period. Throughout the 17th century, it housed the residence of the Dutch governor, before successively serving as a military hospital, police station and post office.

Visiting Colombo also means discovering the religious diversity of the country, which is expressed in particular through these temples. The Kailawasanathan Swami Devasthanam Kovil temple , with its unpronounceable name, is the oldest in the city. The architecture of the building, inspired by Indian culture, is impressive.

This temple shelters many sculptures representing various Hindu gods, in particular two of the principal gods of this mythology: Easwaran (Shiva for the close friends) and Ganesh .

The authentic atmosphere that emerges from this temple is accentuated by the presence of musicians, as well as by the flow of priors entering and leaving the temple throughout the day. A real experience to live if you visit Colombo! In addition, entry is free!

The Tuk-Tuk is the most practical means of transport to visit Colombo. It is used both by tourists but also by locals. As the city of Colombo is quite large, it can sometimes be tiring to explore by walking, especially in hot weather. The Tuk-Tuk is the ideal solution for moving around and what’s more, it’s quite funny!

Let yourself be tempted by these mini cars that will sneak through the city and make you live a real adventure. You will have no trouble finding a driver: the Tuk-Tuk literally swarm in the city of Colombo. Tuk-Tuk will also stop in your first minutes in town to ask you if you want to go up.

Still wondering what to do in Colombo? This memorial symbolizes the independence of the territory of Sri Lanka from the British Empire, obtained on February 4, 1948. The architecture of this building reminds in particular that of the Royal Audience Hall in Kandy.

For the record, it is in this building that was signed, in 1815, the convention marking the end of the kingdom of Kandy, and bringing the country into the British Empire. Drawing inspiration from the architecture of the Royal Audience Hall for this memorial was a great way to link these two major events in Sri Lankan history.

The Independence Memorial is surrounded by a lush garden, in front of which you will find the statue of one of the symbols of the country: Don Stephen Senanayak, also called “the father of the nation” Sri Lankan. Located outside the bustle of the city, the memorial is a quiet place that will allow you to recharge your batteries while discovering the history of this country. 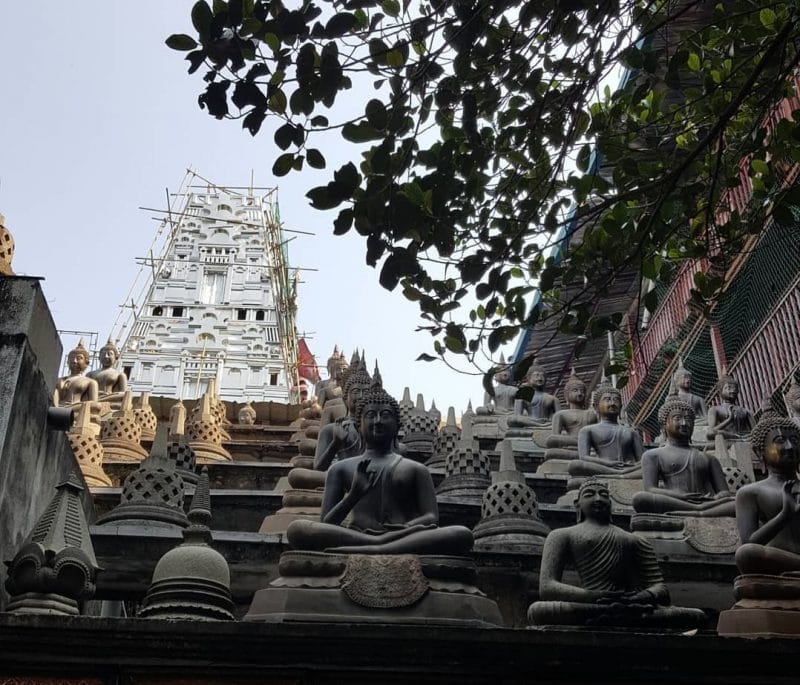 Another attraction not to be missed when you come to visit Colombo: the temple of Gangaramaya. Located in district 2 of Colombo (do not hesitate to take a tuk-tuk to get there), this temple is a tribute to the Buddhist religion and in particular to Buddha, of which you can admire many statues.

The site is divided into several buildings including a library and a museum. The atmosphere prevailing within the place is quite strange, but nevertheless worth the detour.

7. The colonial buildings in the Fort district 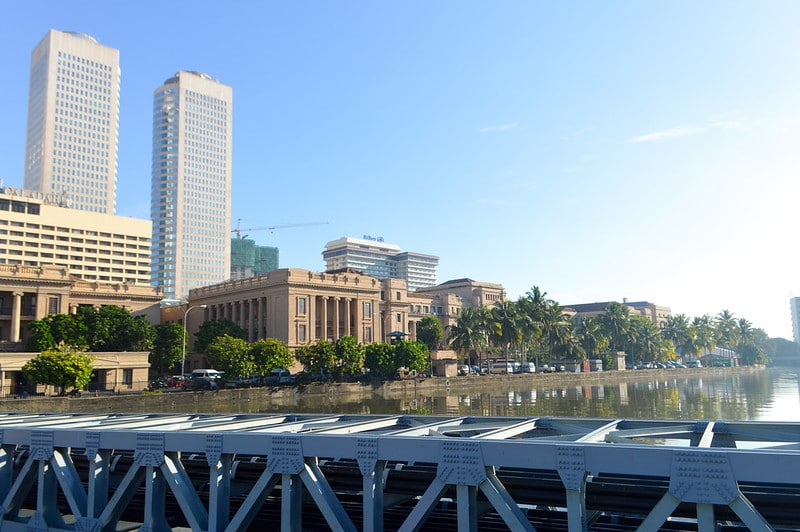 Several traces of the eras of British or Dutch domination are visible throughout the city. In particular, the colonial buildings in the Fort district are among the most monumental remains of these periods.

In the past, the Fort district also housed a real Fort surrounded by the sea on both sides. Today, this district is the seat of many government institutions, such as the President’s house and several ministries.

The colonial buildings have been restored, like the old Dutch hospital which is definitely worth a visit.

Dating from the beginning of the 17th century, it is beautifully restored and now houses excellent restaurants and cafes, as well as many local craft shops that you should definitely discover if you come to visit Colombo.

8. The promenade of Galle Face Green 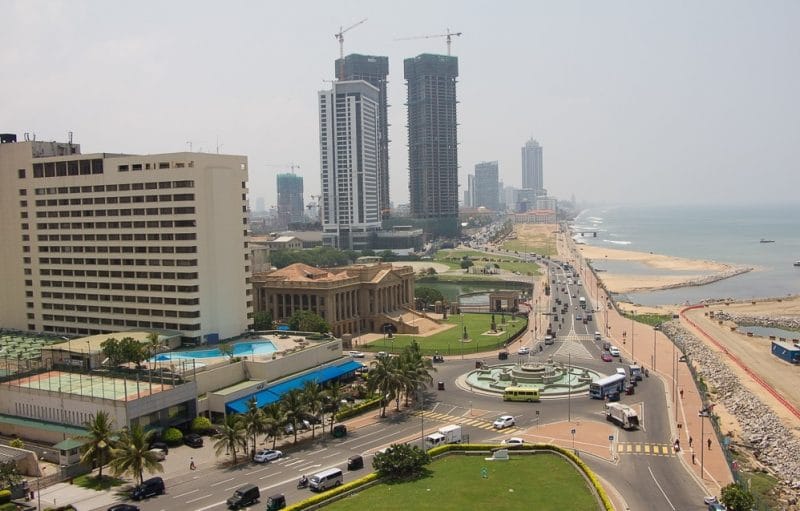 Visiting Colombo cannot be done without passing through this place. It is one of the symbols of the city. Located in the south of the Fort district, the promenade of Galle Face Green is a long green stretch along the sea. The setting is very pleasant for a family stroll near the ocean. Sports enthusiasts will also be able to enjoy it, between running, football and the national sport: cricket!

The promenade is also the ideal place if you want to admire a magnificent sunset.