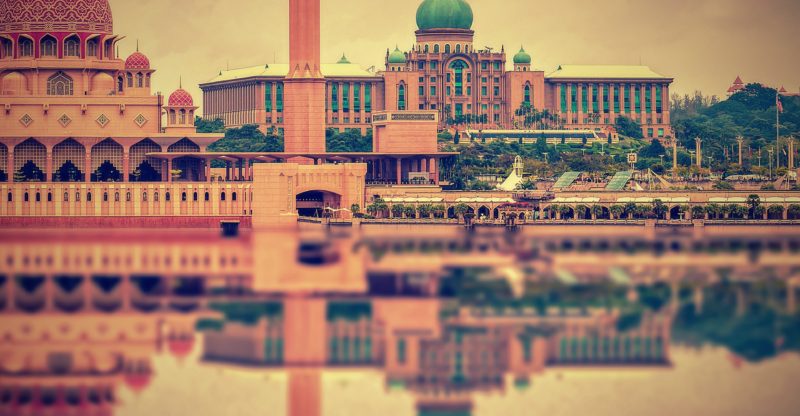 Do you want to visit Malaysia one day? You are lucky! Here are the 12 most beautiful places to visit in Malaysia!

Less crowded than its Thai neighbor, Malaysia has many advantages to attract travelers. This little-known country is actually split into two territories seven hundred kilometers apart, with a western part – located between Thailand and Singapore  – and an island part, north of the island of Borneo. This geographic feature largely explains the religious and cultural diversity of Malaysia.

With nearly thirty-two million inhabitants, Malaysia also stands out from its neighbors due to the influence of Islam, its colonial past which is still very present (Portuguese, Dutch and English) and the various Asian footprints ( Chinese, Malaysian, Indian).

Exceptional seabed, ultramodern capital, grand cultural and religious architecture, there is something for all tastes and desires in Malaysia. So much so that it is sometimes difficult to make a choice. So, to guide you, here is our selection of the most beautiful places to visit in Malaysia. 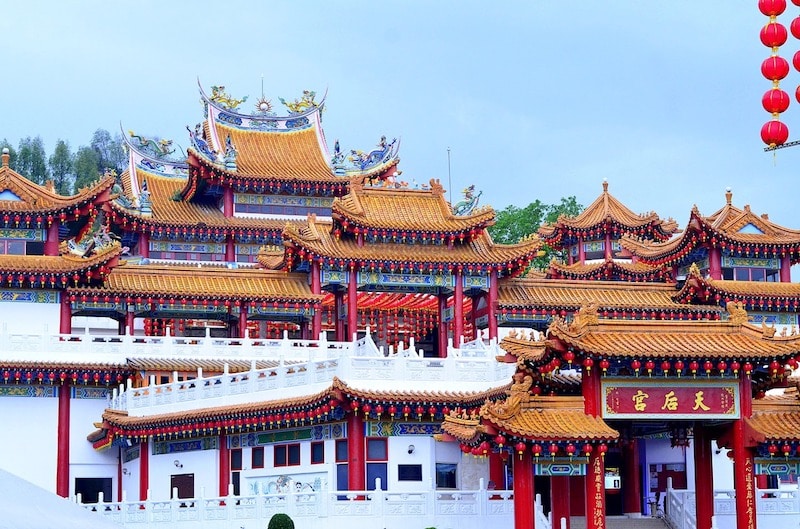 Kuala Lumpur will certainly be your gateway to Malaysia. With nearly two million inhabitants, the large Malaysian capital offers a unique and sometimes astonishing blend of modernity and tradition.

Begin your discovery with the Petronas Towers , a national pride, rising to 451 meters in height and 88 floors, which were once the tallest towers in the world. Then stop at the KL communications tower, also called the Menara tower, and take in the breathtaking view of the city from a platform more than 276 meters above the ground.

Visiting Malaysia also means discovering and understanding the different religions that compose it. A visit to the Masjid Negara and Masjid Jamek mosques is therefore essential. The Sri Mahamariamman Indian temple is also worth a look. Afterwards, admire the national theater and take a tour of the Museum of Islamic Art .

Take the time to stroll through the charming district of Kampung Baru and the hectic streets of Little India and Chinatown. Do you want to bring back some souvenirs in your suitcases? Direction the famous Jalan Bukit Bintang street. You can go shopping, have a bite to eat there, but also enjoy the festive atmosphere of the neighborhood after dark.

Located just ten kilometers north of Kuala Lumpur and accessible by train, you can admire the largest Hindu shrine outside of India. Carved into limestone hills, this emblematic site is best known for its huge golden statue of the Hindu god Murugan and its 272 steps which provide access to the main cave. At the start of each year, more than a million Hindus come to pay homage to Shiva’s youngest son.

Other smaller caves are also worth a visit, especially the one where the Ramayana temple is located. For the more adventurous among you, know that it is possible to take one of the climbing tracks present in the caves. 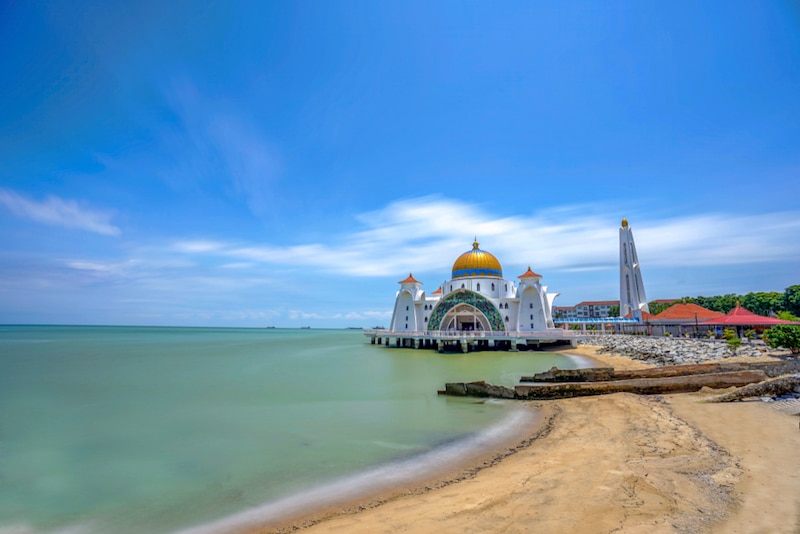 Listed as a UNESCO World Heritage Site, the “Venice of Asia” is considered one of the most beautiful cities to visit in Malaysia. Stroll through the alleys of Malacca and discover the multiple colonial influences that marked the country’s oldest port city.

To better understand the different religious influences that characterize Malaysia, stop at the city’s three main religious buildings, the Kampung Kling Mosque , the Cheng Hoon Teng Temple and the Church of Christ. End the tour of Malacca with its night market  and watch the sunset over the floating Masjid Selat mosque . A dazzling landscape, worthy of the tales of a Thousand and One Nights. 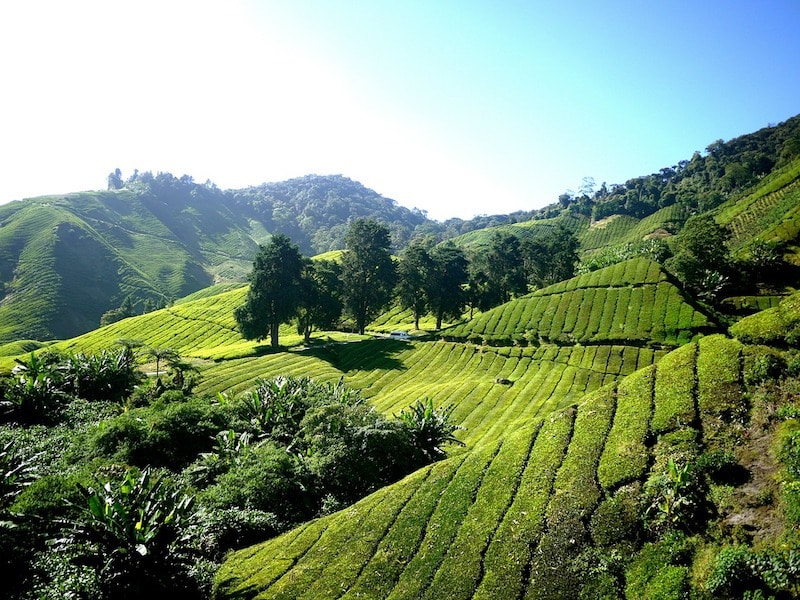 If you are looking for a little freshness, head for the Cameron Highlands . These highlands, where tea is grown, are located at over 1,400 meters above sea level. The emerald green region offers breathtaking landscapes on tea plantations, as well as many activities, which will delight young and old.

Do not hesitate to go on a trek in the mossy Forest or to taste a cup of Boh tea, the most popular tea in Malaysia, cultivated on the lands of the Cameron Highlands for more than one hundred and thirty years. 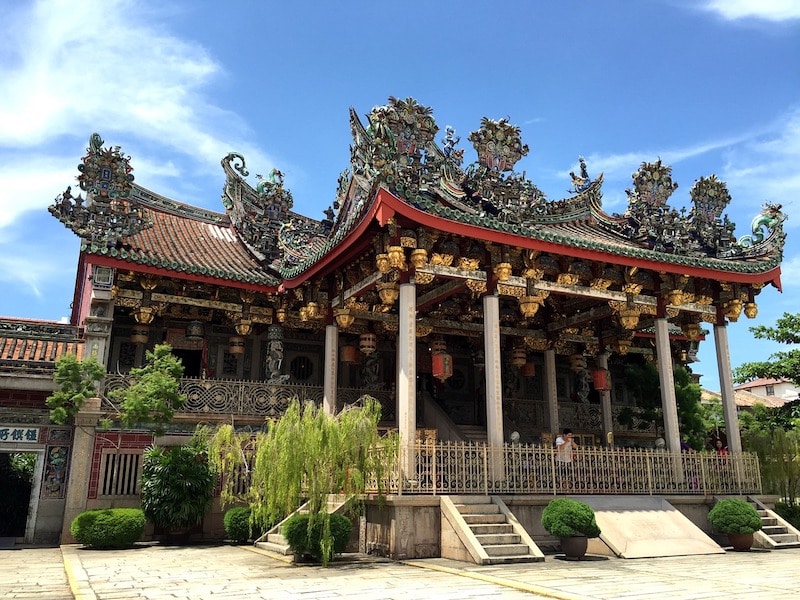 Located on Penang Island and listed by UNESCO on the World Heritage List, Georgetown is an unmissable place to visit in Malaysia. Considered the culinary capital of the country, the city has a surprising architecture, marked by the different colonizations, as well as by the influence of Chinese culture.

True city-gallery, the walls of Georgetown are full of graffiti and works of all kinds. The area is also home to the Khoo Kongsi Temple, a UNESCO World Heritage Site. If you want to venture beyond the mythical district, you can also extend your visit to Penang Island and discover the many Buddhist temples, stroll around the island’s botanical garden or admire the incredible view of the jungle and the city from Penang hill.

6. The island of Tioman 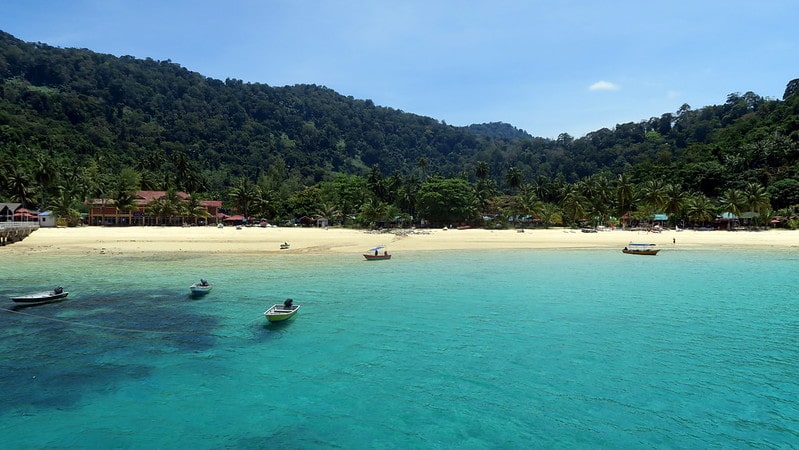 If you are a fan of heavenly beaches and authentic nature, go to the beautiful island of Tioman, undoubtedly one of the most beautiful islands in the country. Located in the China Sea and renowned for its seabed – protected thanks to its status as a marine park – the island of Tioman is the ideal place to practice diving or snorkelling and get to know extremely rare fish, such as fish Napoleon.

But the charm of the island is not limited to its beaches. The interior of the island, classified as a natural reserve, will offer you beautiful discoveries such as the tropical forest and the exceptional animals that inhabit it. You will be enchanted. 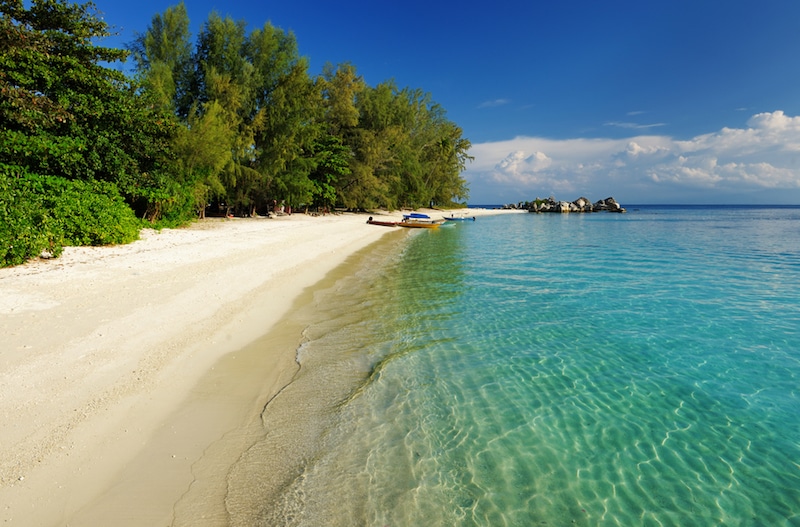 Little corner of paradise located on the east coast of Malaysia, the Perhentian Islands must be visited. White sand and turquoise sea await you, for long afternoons of lazing on the beach at Flora Bay .

Once well rested, you will have the choice between a trek in the virgin forest or a diving session to discover breathtaking seabed. You will come across turtles, fish, corals, and even some sharks. You will inevitably fall in love with the Perhentian Islands. 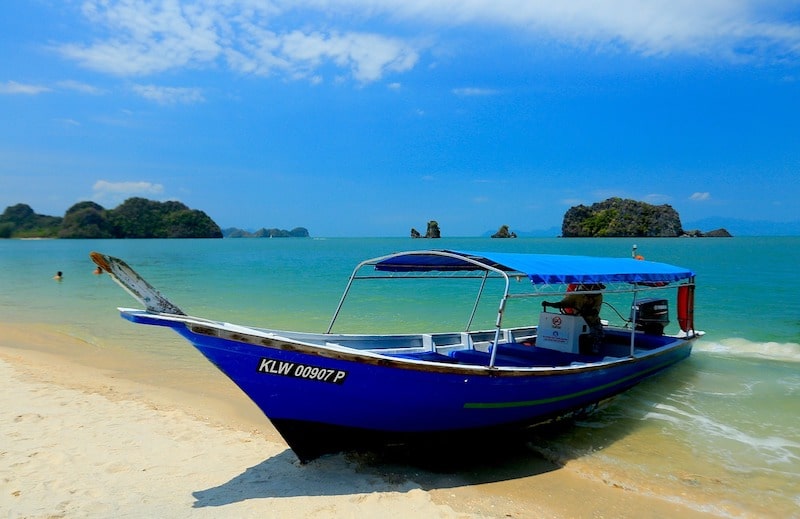 More known and frequented than Tioman or the Perhentians, the island of Langkawi , located in the Andaman Sea, offers its visitors an exceptional natural environment. White sand, coconut palms, and lush nature invite you to relax and contemplate.

Do not be surprised if, during your strolls on the beach, you meet a monitor lizard, a swimming macaque or a sea otter. Classified as a geopark by Unesco, Langkawi indeed abounds in flora and fauna exceptional. The islandis also known for its huge suspension bridge and its impressive cable car. 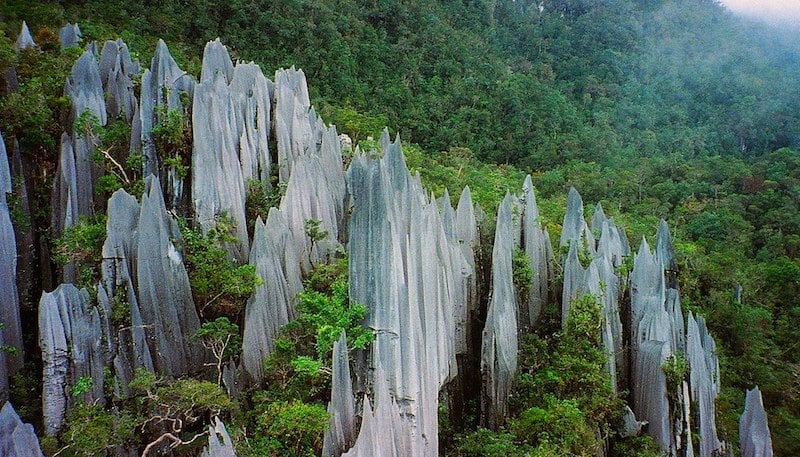 Are you looking for one of the most beautiful national parks to visit in Malaysia? Choose Gunung Mulu Park . Located in the middle of the Borneo jungle, access is only possible by air. The park’s biodiversity is exceptional, as it is home to over three thousand one hundred and five different plant species.

Listed as a UNESCO World Heritage Site since 2000, Gunung Mulu National Park offers its visitors fascinating landscapes, made up of limestone pinnacles and gigantic caves. The latter in particular welcome millions of bats and cave salanganas which, at dusk, fly away in clouds towards the jungle. A magical moment that cannot be missed! 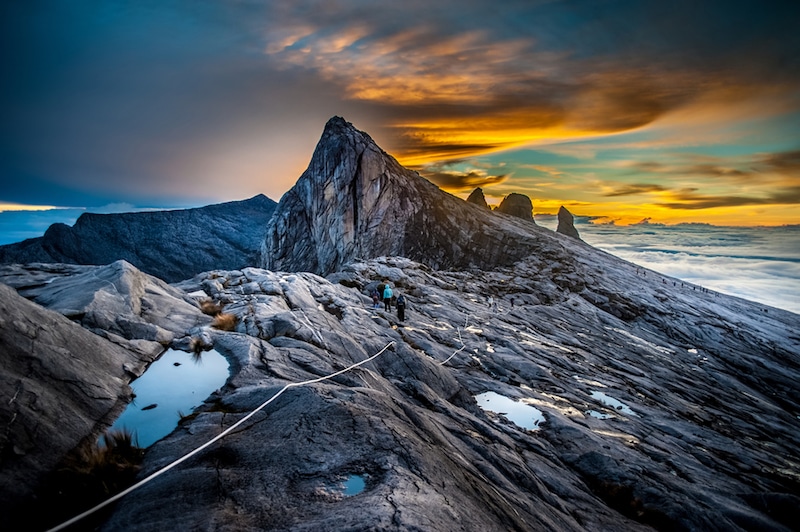 Also located on the island of Borneo in the state of Sabah, the highest peak in Southeast Asia (4,095 m) dominates the Kinabalu National Park, classified as a UNESCO World Heritage Site for its exceptional biodiversity.

Lovers of mountain treks can start their ascent and enjoy a breathtaking landscape of the surrounding jungle and the turquoise blue sea.

For this, you will need to call on the private company in charge of excursions on the mountain. It is indeed forbidden to go there alone and the number of daily visitors is limited. For the less athletic, there are beautiful walks to do in the jungle around Mount Kinabalu. They will give you the opportunity to discover the flora and fauna of the magnificent island of Borneo. 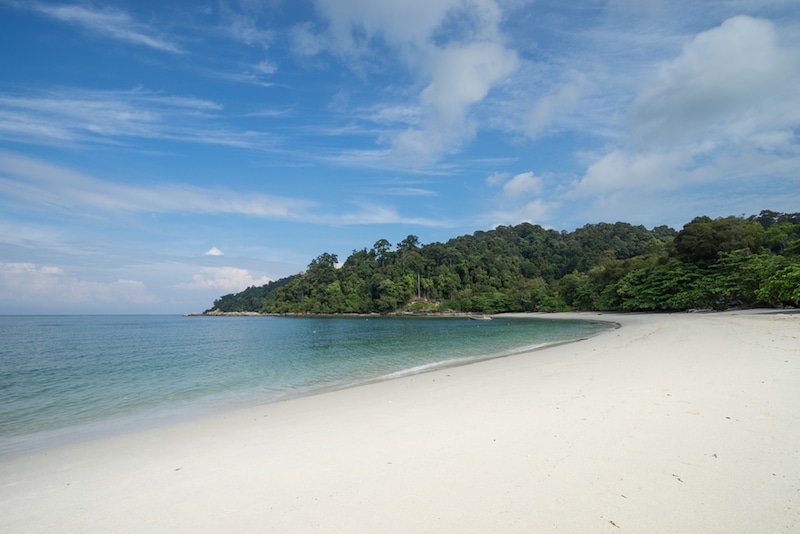 If you are looking for a small authentic island near Kuala Lumpur, go to Pangkor Island. Beautiful calm beaches, a lush jungle, few tourist constructions, the island of Pangkor offers you timeless landscapes, in absolute calm. Some activities are offered on the island, but the main occupation remains relaxing on hammocks and other swings hanging by the beach. 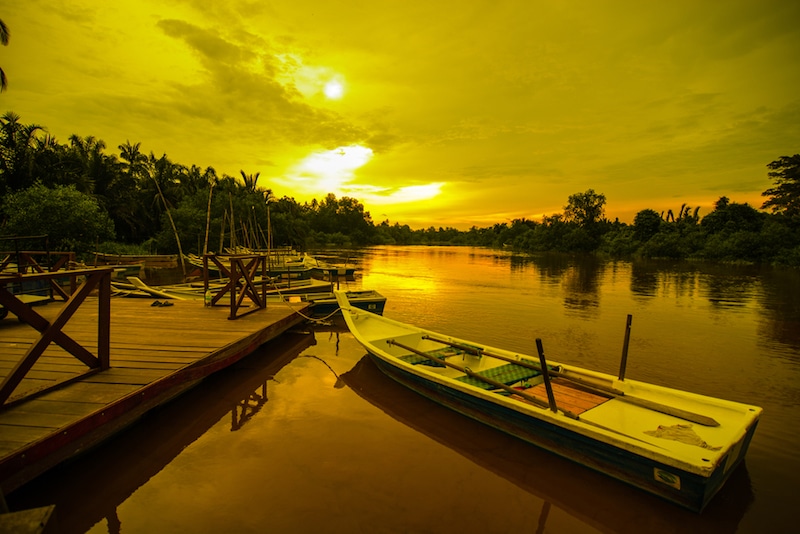 A nice place to visit in Malaysia with your family? Kuala Selangor is the ideal destination. Just an hour’s drive from Kuala Lumpur, you’ll embark on a ride along the Selangor River to admire the thousands of fireflies that sparkle through the mangroves at night. A magical experience that will delight the whole family.

There you go, our list of the best places to visit in Malaysia, tell us what you think in the comment section. 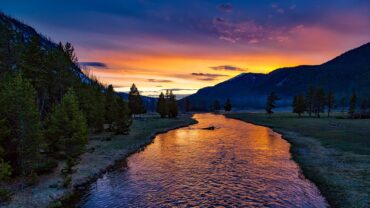