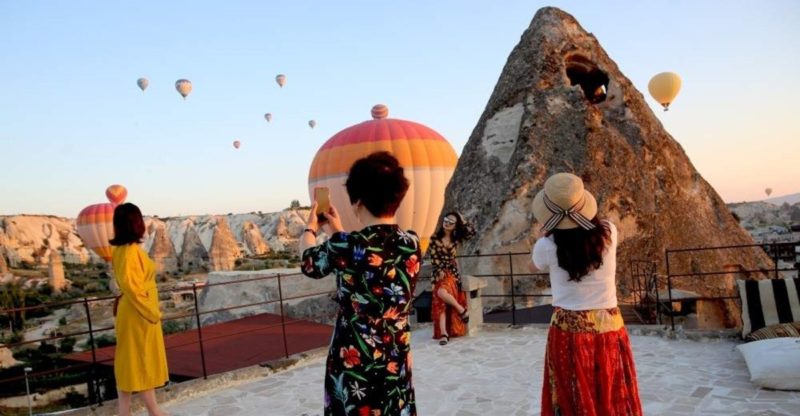 Come to Turkey to discover one of the most beautiful regions on the planet! What to do in Cappadocia? Here are the 12 essentials not to miss.

Located in the heart of Anatolia, the Cappadocia region is unique in the world. Three volcanoes have sculpted a landscape there that seems to come straight from another planet. Its earths in ocher and powdery colors contain real works of natural art.

But the different human civilizations that have followed one another have also bequeathed priceless treasures to the world. You will find there a profusion of cave remains and rock sites, swept by a true mythological breath.

Gorëme, Derinkuyu, Ürgüp… Discover Cappadocia, its valleys, its underground cities and its villages with names so suggestive. Here are the 12 things not to miss during your stay! 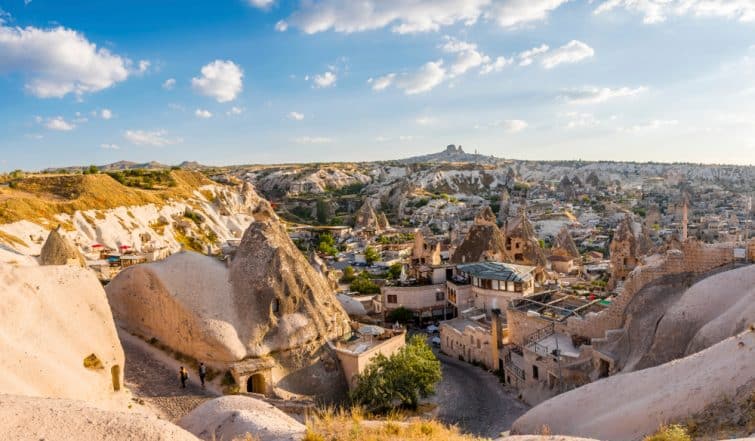 Among all the wonders that can be found in Cappadocia, the Gorëme valley is the most famous. It contains a small troglodyte village of the same name, sculpted jointly by erosion and by man. Walking through its alleys, you have the opportunity to observe these curious plump houses dug into the rock from the 4th century. Around you, a lunar panorama extends. It is speckled with fairy chimneys, columns of natural rocks surmounted by a hat.

Nearby you will find the Gorëme open-air museum. It is a Byzantine monastic complex, which became a place of pilgrimage from the 17th century. Here you can marvel at churches, monasteries and chapels carved into the rock. Some remains contain breathtaking religious frescoes. 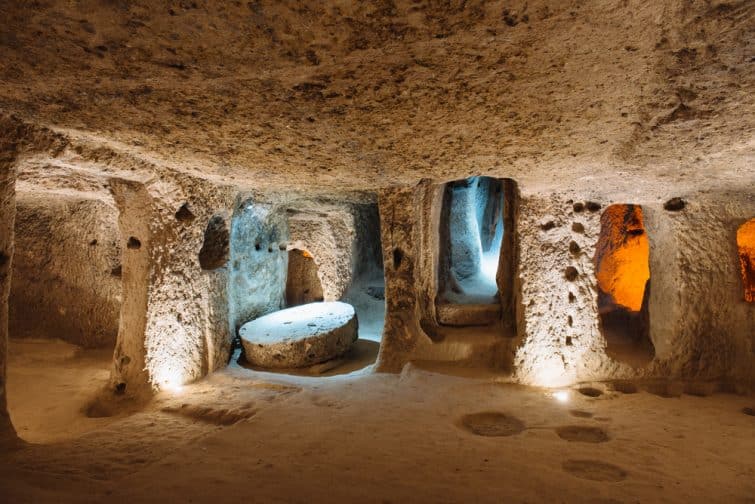 The toponymy of Cappadocia often contributes to the magic of the place. This is particularly true for Derinkuyu, which means “deep well”. Derinkuyu is an underground city, the largest and certainly the most beautiful in Turkey. If its history is bathed in mysteries, we know that it would have been dug in the 8th or 7th century BC. It could then house nearly 20,000 people and their livestock!

But Derinkuyu had many other functions. Refuge for Greek Christians persecuted by the Roman Empire, then for Orthodox Christians driven out by the Umayyads and the Abbasids, place of protection for the Greeks against the Turkish nationalists… Today, it is open to tourism. Visiting Cappadocia is an opportunity to explore the mazes of Derinkuyu and learn more about the curious daily life of its former inhabitants.

3. The valley of love 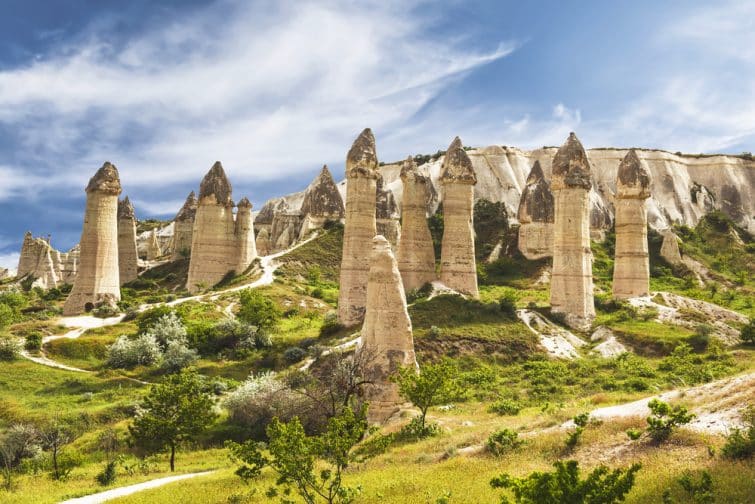 Visiting Cappadocia is discovering valleys that are nothing like what you already know. The Valley of Love is a perfect example. It offers an immense landscape all in shades of beige, which shelters unusual rock formations! Because if the valley has been listed as a UNESCO World Heritage Site, it is in particular for its numerous fairy chimneys. These large columns gave the valley its beautiful name. Why ? We let you judge for yourself by looking at the photos…

The valley of love offers unforgettable walks among these beautiful tuff chimneys with a suggestive shape. The particular light that bathes the place and the scent of apricot trees help to make the atmosphere unique. 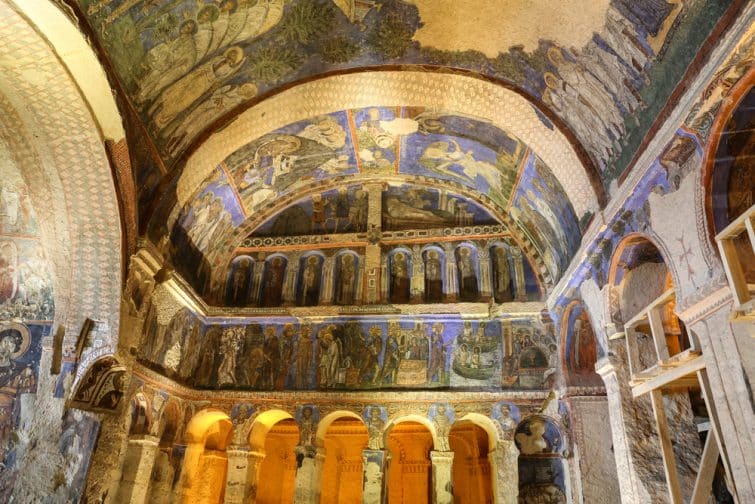 What to do in Cappadocia to make the most of its religious heritage? Visiting the rock churches is obviously a must. While most were founded around the 11th century, others date back to the 4th century. The region is home to many, and all of them are exceptional. Perhaps the most impressive of all, however, is Tokali Church, or Boucle Church. Built at the beginning of the 10th century, it shelters a spectacular set of medieval frescoes.

Despite their respected age, they are admirably well preserved. Visiting Cappadocia is therefore an opportunity to admire these striking examples of Byzantine art from the early Middle Ages. An extraordinary ancient vestige. 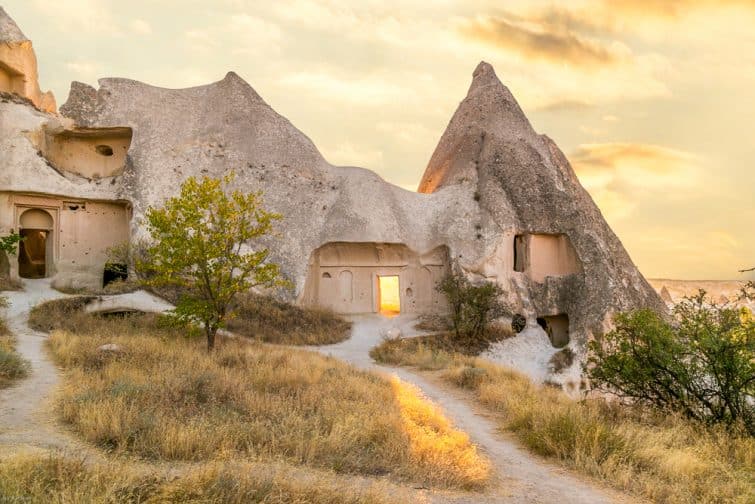 The open-air museum in Zelve is an excellent alternative to that in Gorëme. If you’re looking to find out what to do in Cappadocia to get away from the crowds, this is the place to go! Zelve offers breathtaking reliefs. Lined with small tuff chimneys, the site is also home to numerous rock constructions. Churches, homes, mill, dovecotes …

In just over two hours, you will have the time to travel the trails reserved for tourism. A very charming ride, during which you may not meet anyone!

What to do in Cappadocia to learn more about its history? Did you know that the region once belonged to the Roman Empire? There is not much left of that time. The most notorious vestige is the ancient city of Sobesos, founded in the 4th century AD. In fact, it is the only known Roman city in the region. It was only discovered in 2002! Lost in a green field, Sobesos will be a special visit during your stay in Cappadocia. If the excavations are still in progress, you can already have a good overview! Among the Agora, the thermal baths, the basilica and the cemetery, you will find magnificent mosaics.

Sobesos attracts few tourists. However, we recommend this parenthesis. Between the tranquility and the apple trees in bloom, the atmosphere lends itself to immersion. 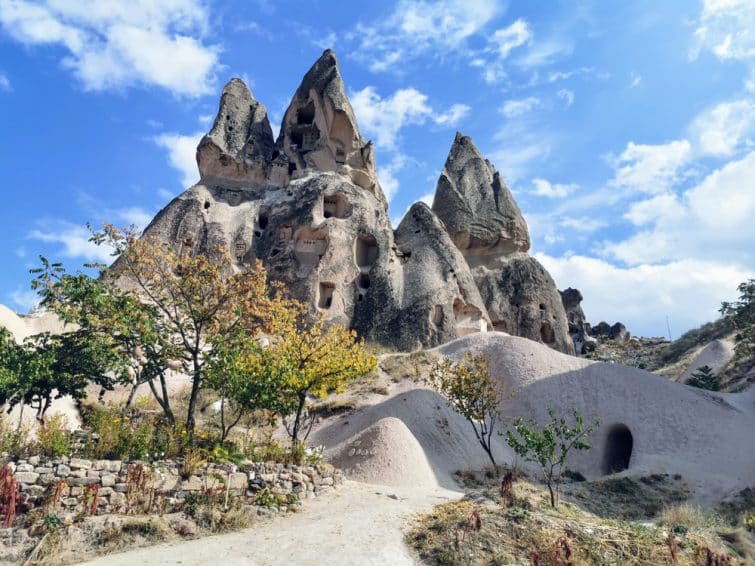 Visiting Cappadocia is an opportunity to discover many troglodyte villages. Uçhisar is one of the most beautiful in the region. Less touristy than Gorëme, it offers sumptuous landscapes. His particuliarity ? It is dominated by a rocky outcrop, the Castle of Uçhisar, or Kale. The latter is traversed by a complex network of galleries and caves. They were dug in the Hittite era, that is to say about 1500 years before our era! The “first known skyscraper in history” gives Uçhisar the air of Tatooine. Especially since it is not a “dead” heritage. Some cave houses are still inhabited! 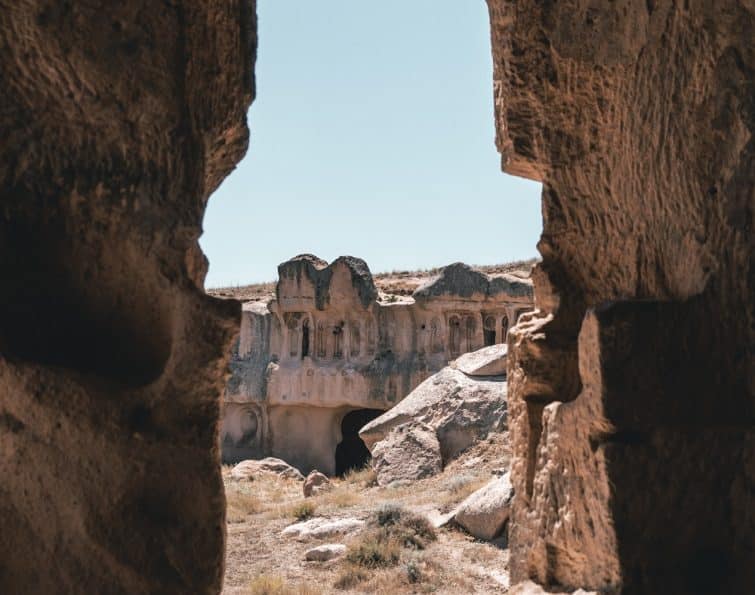 Açik Saray is a must visit to discover Cappadocia in all its complexity. It is an exceptional heritage, which is called the open air palace. In truth, it is a monastic group founded by the followers of Saint Basil the Great of Caesarea.

You will find three cave churches, as well as a series of rooms dug in tuff. Two sculpted facades are particularly eye-catching. In a way, they are reminiscent of the Al Khazneh gate of Petra.

On the way, don’t miss the Mantar, the star of postcards! Indeed, it is the most emblematic fairy chimney of Cappadocia. An unusual treasure.

9. The pink valley and the red valley

Visit Cappadocia without admiring the flamboyant palette of colors offered by the pink valley and the red valley? Unthinkable! Güllüdere and Kizilcukur are unmissable. Take a day to explore the characteristic reliefs of these sites. Erosion has sculpted curves of great delicacy on the landscape. But nature is not the only craftsman! On the way, you will also meet rock churches adorned with millennial frescoes.

If the path is known to be easy to navigate, we advise you to bring a map with you. Many visitors end the hike by missing certain points of interest. Anyway, this getaway in the Turkish nature will engrave in your mind many shapes and colors. 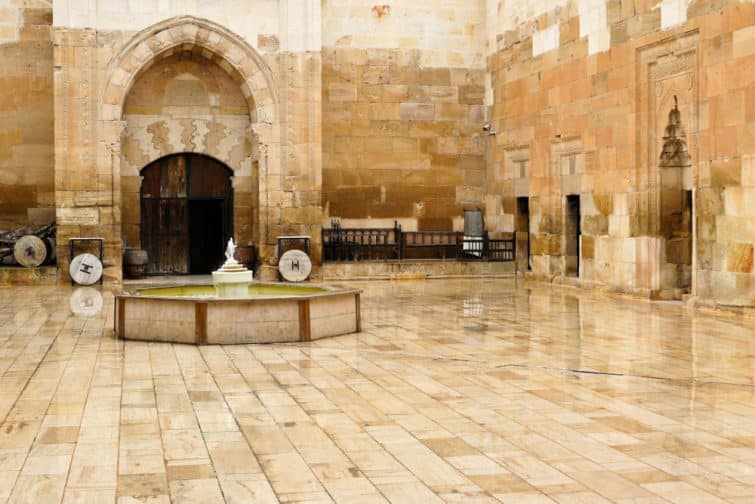 The caravanserai of Sarihan is a superb example of Islamic architecture to visit in Cappadocia. But what is a caravanserai? It is a place intended to serve as a stopover for merchant caravans and pilgrims. Fortified, it has stables, shops and rooms. The Sarihan caravanserai was built in the 13th century by the Seljuks and restored in the 20th century. Hence the different shades of stones that you can observe on the site.

The monumental entrance to Sarihan is particularly interesting. Its superbly preserved facade is very finely carved. It has complex patterns, some of which are simply unique in the Islamic sphere. 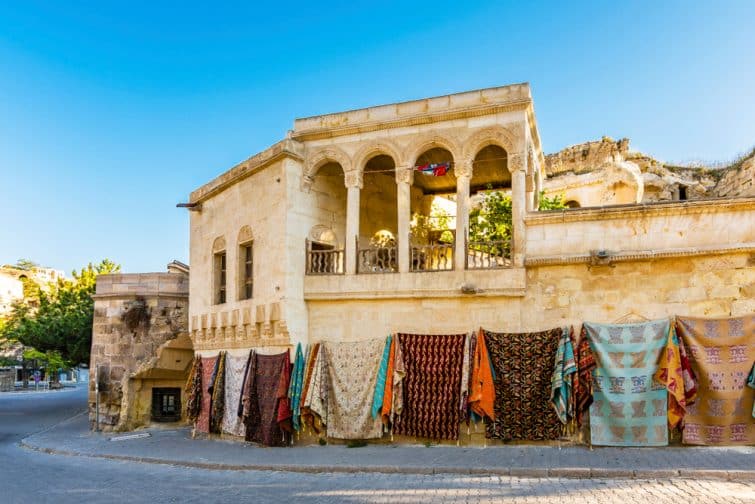 Mustafapasa is a charming town which was inhabited by the Greeks until 1923. It is an ideal visit if you are looking for what to do in Cappadocia to learn more about this cohabitation! Indeed, among the beautiful cave houses pierced in the cliff, you will come across typical Greek dwellings. You have the opportunity to visit them. They present an admirable stone work. Take a break at the Old Greek House , built in the 19th century, to enjoy a mint tea.

In Mustafapasa, do not miss a visit to the churches of Saint-Constantin and Saint-Helene. Their pediments are decorated with paintings of bunches of grapes. If you want to go inside, you can ask for the keys at the tourist office. 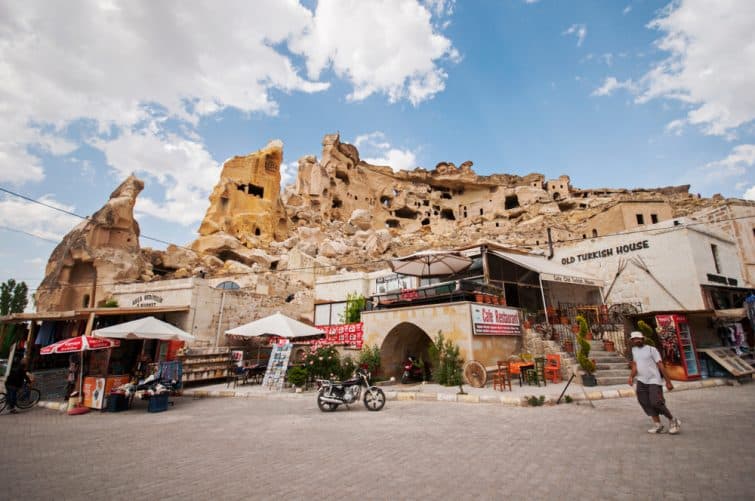 What to do in Cappadocia if you are looking for authenticity? Ürgüp is a troglodyte village which has kept all its charm. Walking through its old district carved out of the white rock promises a real moment of escape. Besides the sumptuous landscape that spreads out at its feet, its lively alleys are worth seeing.

The clatter of craftsmen’s tools and the rumor of small shops help to enrich the atmosphere. If you have to choose a day of the week to visit Ürgüp, it’s Saturday! The market is indeed particularly pleasant. Do you want to relax? Meet at the Ürgüp hammam, an old, refurbished Greek church 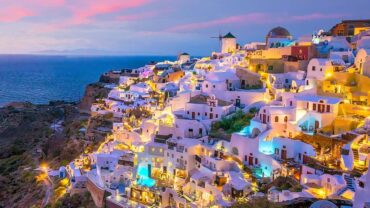