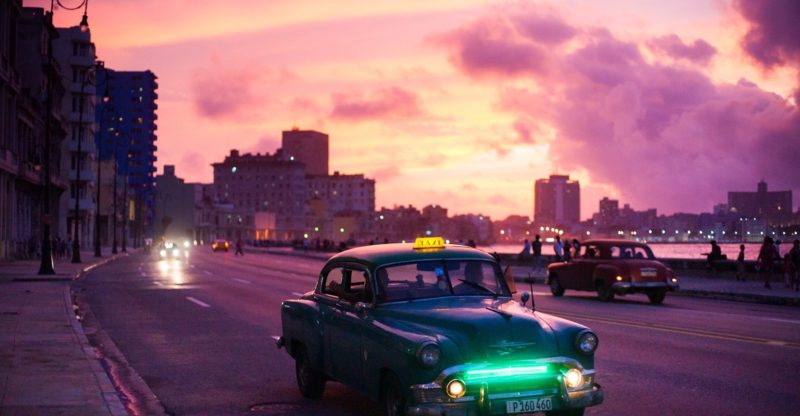 Are you going to Cuba? After Havana and Santa Clara, do not miss to visit Santiago de Cuba: here are 10 essential things to do!

For some, Cuba symbolizes the socialist revolution embodied by the icon of Che Guevara, more than half a century of struggle against the capitalist order, a timeless place and unique in the world. It was in Santiago de Cuba that on July 26, 1953, the brothers Fidel and Raúl Castro and their men attacked the Moncada barracks, the starting point of the Cuban revolution.

For others, Cuba is a dictatorship. But whatever you think, Cuba is no longer as protectionist as before: it’s recent opening to world tourism makes it a new favorite tourist destination for travelers. Santiago de Cuba is the second-largest city in Cuba after Havana with an estimated population of 510,000 or 515,000 inhabitants (2018). Located at the bottom of a bay between the Caribbean Sea and the Sierra Maestra, 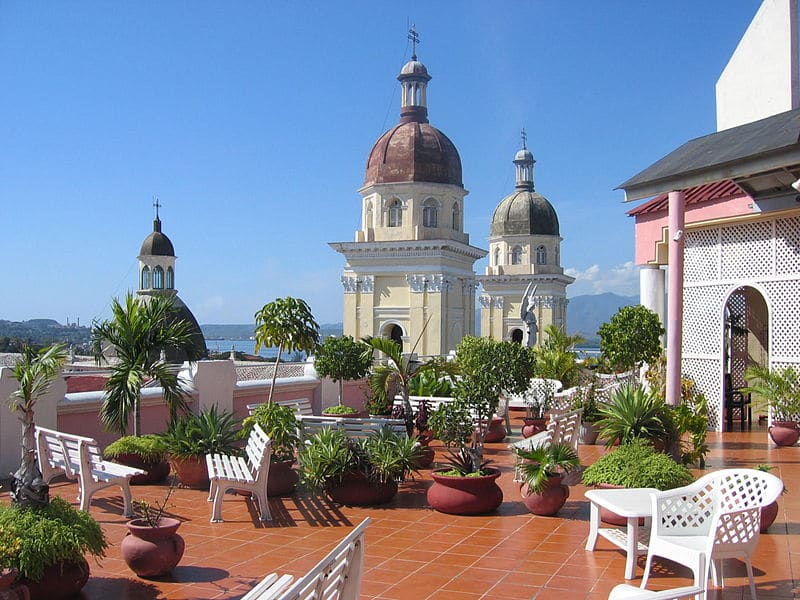 Exuberant, rebellious, multicultural and the cradle of the Cuban revolution, Santiago de Cuba is a city rich in history and colorful. Start your tour of the center with the Cespedes Park, named after Carlos Manuel de Céspedes, a historic figure of the country. Climbing to the top of the Casagranda hotel, you will enjoy a panoramic view of the city. The locals like to meet there, exchange, stroll, listen to music.

The center is composed of buildings typical of the colonial era and in fact concentrates a multitude of monuments and museums to visit: the balcony of Vélasquez, the Vélasquez house, the Carnival museum – the Carnival of Santiago, which is held the second fortnight of July, is the most colorful and lively in the Caribbean – the underground wrestling museum.

2. Cathedral Basilica of Our Lady of the Assumption 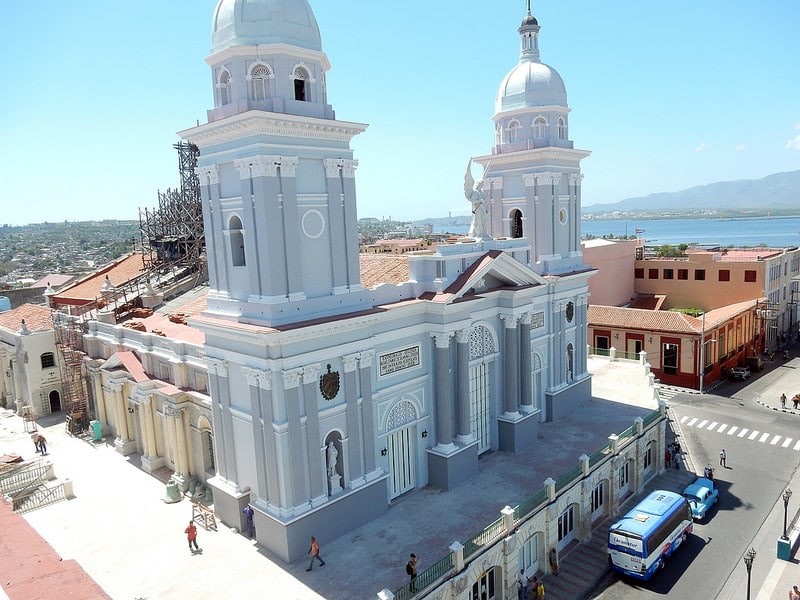 What to do in Santiago de Cuba? Located to the south of the main Piazza Céspedes, the Cathedral Basilica of Our Lady of the Assumption – Basilica de Nuestra Señora de la Asunción – is a cathedral not to be missed in the city. It was built on the site of the first chapel in Santiago, built in 1514. It was destroyed several times by earthquakes and the ravages of piracy. The current version of the building dates from 1922. 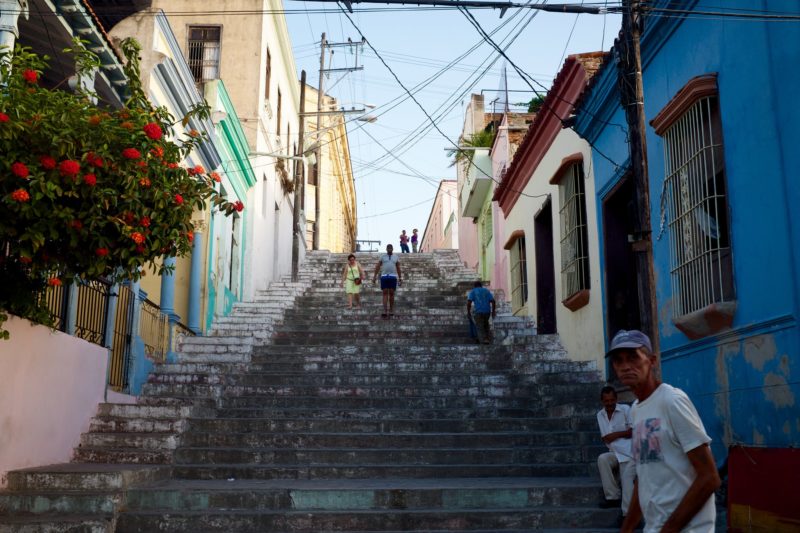 In 1804, fleeing Santo Domingo at the end of the independence of Haiti, the French colonists docked at the port of Santiago de Cuba. They created the Tivolí district, named after the café-concert they set up, which met with great success among the local population. The Tivolí district is a maze of steep alleys, including the Padre Pico stairs. It is a must to see when visiting Santiago de Cuba. 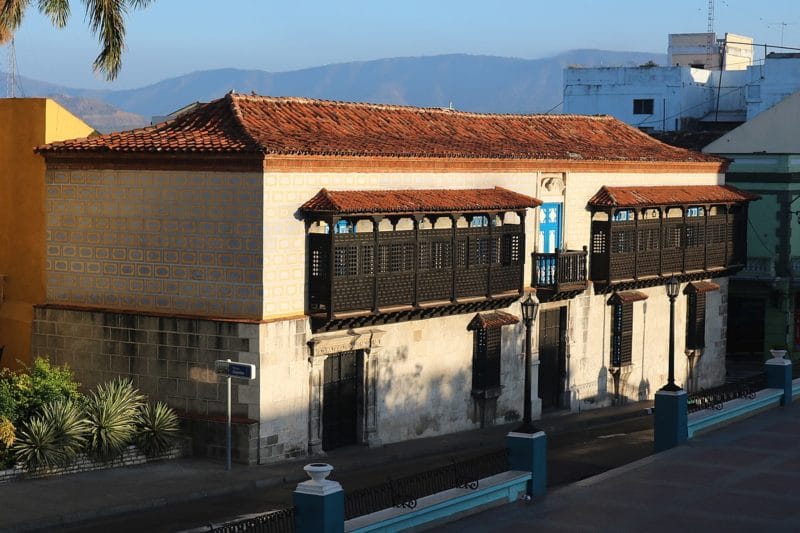 Built at the beginning of the 16th century for the Spanish conquistador Diego Velázquez de Cuéllar (1465-1524), the Velázquez house is like a must-see museum, with furniture in mahogany, cedar, and ebony, dating from the 16th and 17th centuries. If you do not know what to do in Santiago de Cuba, enter the patios and the interior courtyard of the house, admire its superb terraces.

5. The museums of Santiago 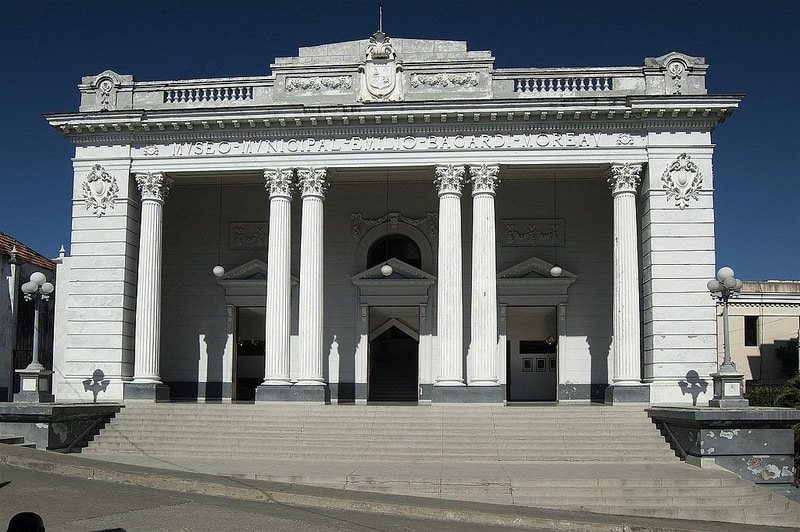 The museum heritage of Santiago, as often in Cuba, is important. Do not miss the Revolution Museum. The latter traces the history of the July 26 Movement, named M-26-7, evoking the failed attack of the Castro brothers and their companions against the Moncada barracks (the second-largest military barracks in Cuba under the dictatorship of F. Batista ). The museum traces the life of F. País, a Cuban revolutionary murdered by the police at the age of 22 in 1957.

The Emilio Bacardi Moreau Museum, founded at the end of the 19th century, houses archaeological, historical, and artwork collections. There are works by Cuban artists such as Wifredo Lam, René Portocarrero, Federico Martínez Matos, and Alberto Lescay. 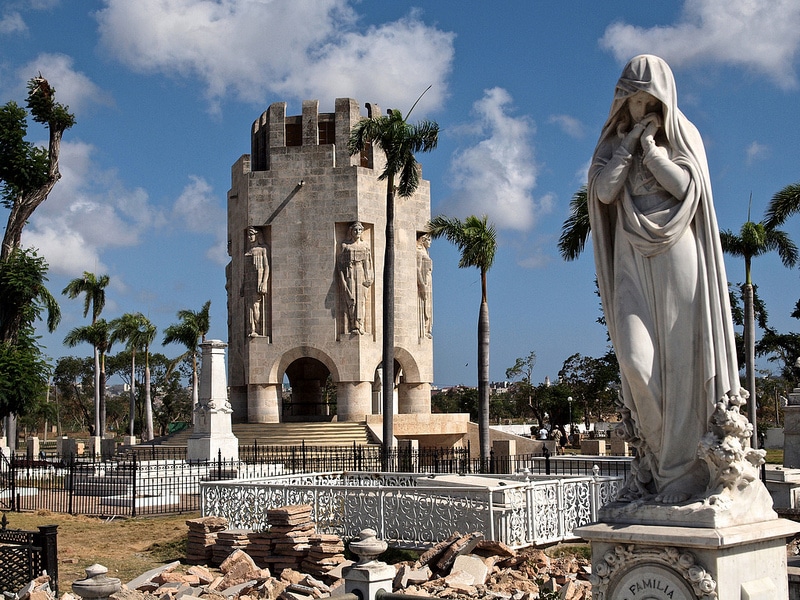 Why go to the cemetery when visiting Santiago de Cuba? Here is an absurd idea! Cuban necropolis founded in 1868 to bury the victims of the War of Independence and those of an epidemic of yellow fever, the Santa Ifigenia cemetery was classified as a national monument in 1979. Several great figures of the revolution and the struggle for independence of Cuba rest there, like Carlos Manuel de Céspedes (1819-1874), José Martí (1853-1895), Frank País (1934-1957) and Fidel Castro (1926-2016). 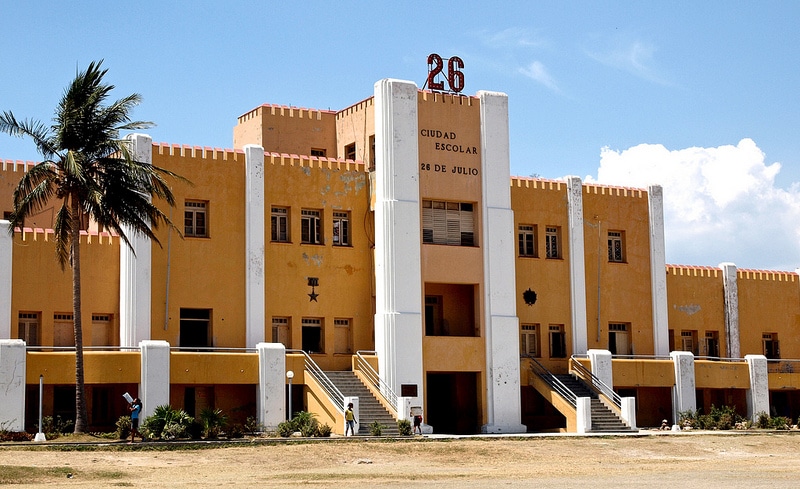 We have already mentioned it: if you like the Cuban’s history, you must absolutely come to the Moncada barracks while visiting Santiago de Cuba. It was there that, on July 26, 1953, the Castro revolution began. This assault was a bitter failure and most of the revolutionaries were killed, tortured and/or executed by the Batista army. This bloody day is considered to be the start of the Cuban revolution. The facade is still riddled with bullet holes today. The barracks has been converted into a school and a museum: the Museo Histórico 26 de Julio (Historical Museum of July 26th). 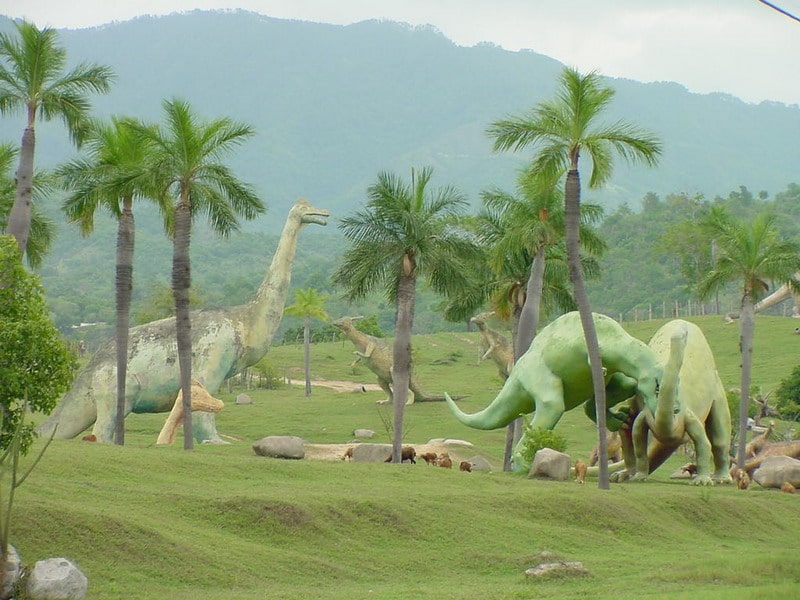 Baconao Park is located east of the city. It is an 80,000-hectare biosphere reserve, recognized by UNESCO since 1987. You cannot visit Santiago de Cuba without spending a day exploring this national park: you will find the famous La Gran Piedra, life-size reproductions of dinosaurs, and a botanical garden, Jardin Ave de Paradiso. The park also houses an automobile museum, with more than 2,500 cars. 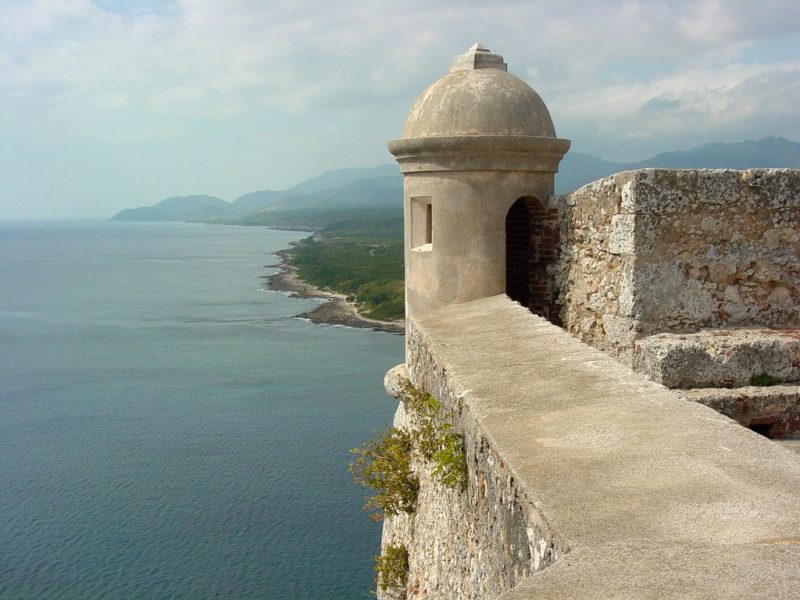 Located south of the city, the Castillo de San Pedro de la Roca del Morro fortress  (Castle of San Pedro de la Roca) is a building of great architectural value, recognized as World Heritage by UNESCO since 1997. The castle was used to defend the south coast of Cuba under Spanish colonization. 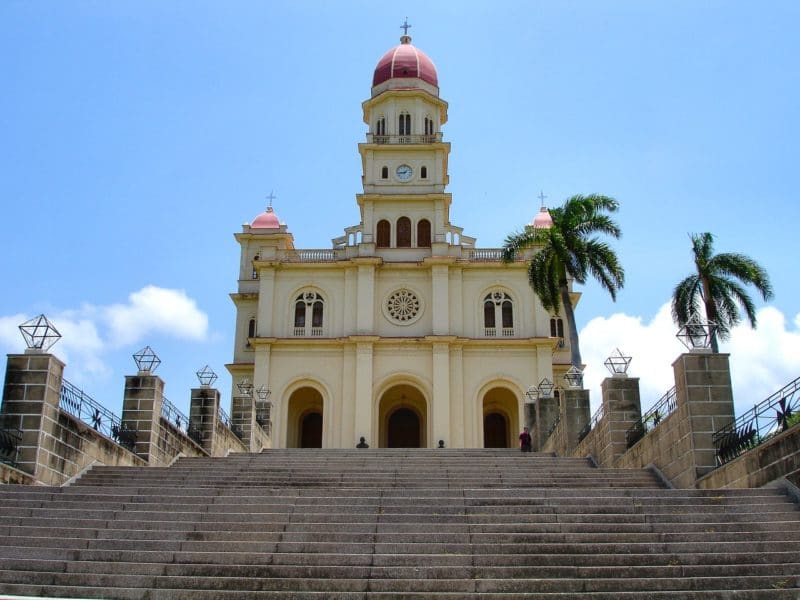 Looking for a last activity to do to visit Santiago? Located about twenty kilometers northwest of the city, this Catholic building – the Basilica of Our Lady of Charity – is a place of pilgrimage for the Cubans, and owes its name to the open-pit copper mines, exploited by the conquistadors in colonial times.

Where to stay in Santiago de Cuba?

To find where to sleep and visit Santiago de Cuba serenely, we recommend targeting the historic center, near the most popular streets of the city (calle Heredia and calle Enramada). For more comfort, aim for the Vista Alegra district, a chic district north of the city center. In terms of feet on the ground, there too you have the choice: apartments, hotels, guesthouses, private accommodation (casa particular)… It all depends on your expectations and your budget.

Are you planning to visit Cuba? Let me know if you fancy visiting Santiago de Cuba. 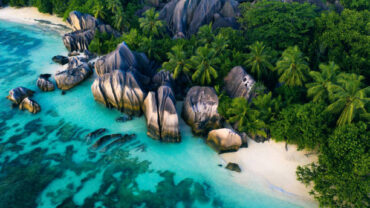