Are you passing through the French capital? So take the opportunity to visit the street Art in Paris through our route ideas!

The beautiful French capital is known worldwide for its historical monuments, its fascinating museums, and its modern architecture. Few visitors think Street Art when talking about Paris. However, like any culturally dynamic city rich in history, there is obviously no shortage of space for aspiring artists. Buildings, walls and concrete spaces are then Picasso’s paintings of contemporary times!

Are you passionate about this alternative art or do you just want to marvel at the various street art in Paris? In this article, we are showing you all the tours and route ideas to discover during your stay in the capital!

Street Art in Paris in a few words

In Paris, magnificent or strange works of art hide or appear without complex, at the turn of each street, on a facade or a pillar. Urban art has long since entered the DNA of the French capital. After all, Street art makes its nest wherever concrete and the urban jungle appear.

There are so many wall graffiti, like those of Basquiat, stencils, anonymous tags, posters or clandestine collages. Big names appear: Jef Aérosolf , Miss.Tic, Invader or Shepard Fairey. Local or unknown artists also come to challenge the great ones by painting their frescoes where the envy takes them! In short, and as one might imagine in a cultural center like Paris, urban art has taken hold and it is displayed everywhere. In each district, you will be able to discover some extraordinary works.

In the 13th arrondissement

If there is one essential district for urban art in Paris, it is the 13th arrondissement! In recent years it has become the preferred spot for street artists. Become a real open-air museum, you will discover immense urban frescoes covering the facades of low-cost housing. On Boulevard Paris 13 for example, you can admire works by artists like Maye, Shepard Fairey, C215, Inti or Conor Harrington.

So keep your eyes up to contemplate the 50 frescoes produced by 22 different artists. We particularly recommend the surroundings of the National metro, rue Jeanne d’Arc and boulevard Vincent Auriol. The American artist Shepard Fairey notably produced a famous fresco bearing the French motto: “Liberty, equality, fraternity”. Right next to it, you will also see a work representing Doctor House, signed by the French Invader! Another well-known spot in the district: the Butte-aux-Cailles where there are also around ten frescoes. You will understand: the 13th arrondissement is not to be missed during your discovery of street art in the capital of France.

In eastern Paris: from Oberkampf to Ménilmontant 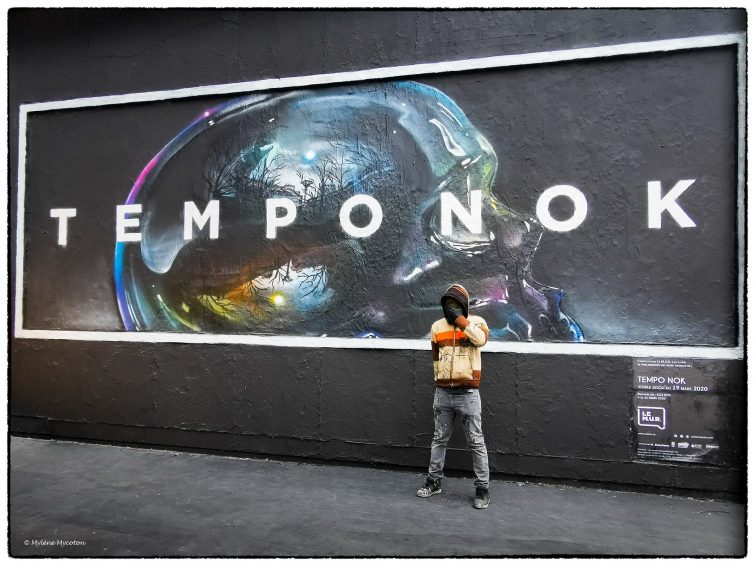 Among the major spots of street art, there are obviously the districts of Oberkampf, Belleville and Ménilmontant. For the itinerary, we advise you to go up the rue de Ménilmontant. In particular, you will discover an emblematic fresco by Jérôme Mesnager. Further up the same street, you can admire recent works on the facade of the Pavillon Carré de Baudoin. Renowned artists regularly repaint it. Also take a walk in rue Henri Noguères, rue des Petits Carreaux, towards Point Éphémère and the quays of the Saint-Martin canal. In all these passages, you can admire magnificent frescoes, which are really worth a look!

But above all, we recommend the spot at 107 rue Oberkampf. Every two weeks, you can attend a performance by a new artist. The latter expresses himself freely on the spot, “painting” in public and during the day. The spot regularly changes shape and color, to the delight of fans and spectators. It is, therefore, a spot not to miss during your visit to Paris!

Before leaving eastern Paris, also consider strolling through Belleville Park in the 20th arrondissement. You can admire works by artists like Seth, Kenor or El Pez. They spread everywhere, on the walls and pillars.

In the district of La Villette

In this district of the 19th arrondissement, there are two emblematic streets for urban arts. The first, Rue de l’Ourcq, is not far from the canal. You will find a long wall that several artists from the 19th arrondissement have embellished. Each has brought its own personal touch, creating an exceptional and unmissable fresco. You will recognize in particular the dancing characters of the graffiti artist Psy, the luminous portraits of Marko 93 or the ethnic masks of DaCruz.

The second street, rue d’Aubervilliers, houses one of the longest frescoes in Paris, if not the longest! Over almost five hundred meters, you will discover breathtaking works. Kashink, Combo and JonOne notably paid tribute to the famous Rosa Parks. This work in particular is a must-see and should be admired by any lover of Parisian urban art.

In the center of Paris: from Beaubourg to Gainsbourg 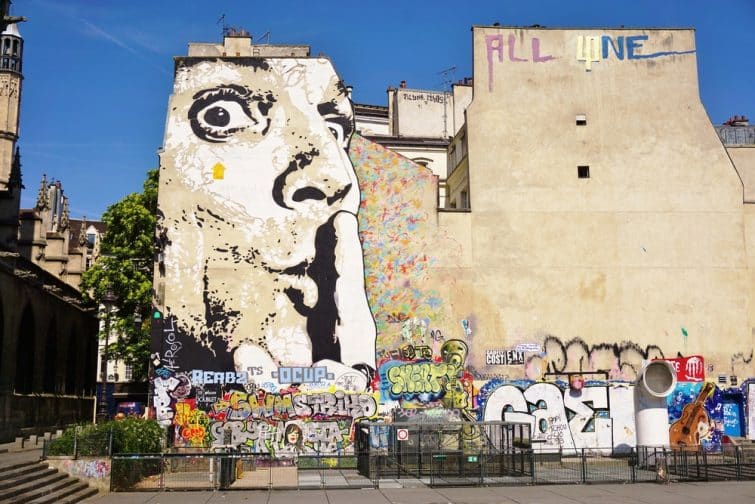 The center of Paris is obviously not lacking in street art. The city center walls have thus become a real playground for local and international artists. To start your discovery, we recommend that you start at Igor-Stravinsky Square. You will notably discover a gigantic work by Jef Aérosol. Stenciled, it represents the enigmatic face of a man inviting silence, presumably Dali. Nearby, the artist Obey Giant painted a feminist work on a neighboring facade. It is also not to be missed!

Then continue your visit via rue de la Verrerie, where there is still a work by M.Chat. Finally continue your walk on the other side of the Seine, on the left bank. In the chic district of the 7th arrondissement, in rue de Verneuil, you will find the house once occupied by Serge Gainsbourg. Rest assured, it is inevitable. Since the death of the singer and poet in 1991, its walls are covered with paintings, drawings, graffiti and posters. Almost all pay homage to this famous man, much appreciated by the French! 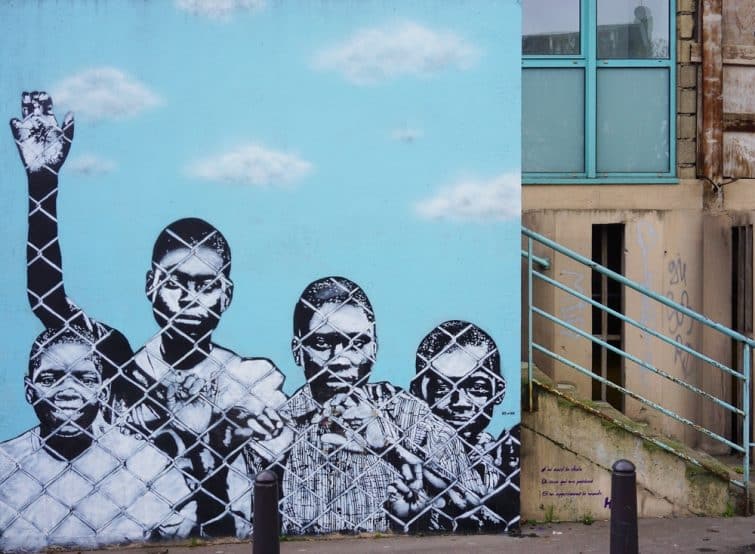 After the city center, we recommend that you go outside the capital. Different arts are also found in all the neighboring cities. Among them, Vitry-sur-Seine stands out as one of the most dynamic, artistic. It is in the process of acquiring the sweet nickname of “city of street art”, in particular thanks to the efforts of artists, associations and local public authorities. You should not miss it!

Here, urban art is everywhere: on a corner of the wall, on a sidewalk, on a lamppost or any pillar, sometimes even on an electric terminal! You will see works and creations of all types: various graffiti, stencils, or even painters. But we reassure you: here you will also find large frescoes! For example, in the rue Pierre Semard, you can admire an emblematic work of the city: the “French robot” of the Italian artist Pixel Pancho. 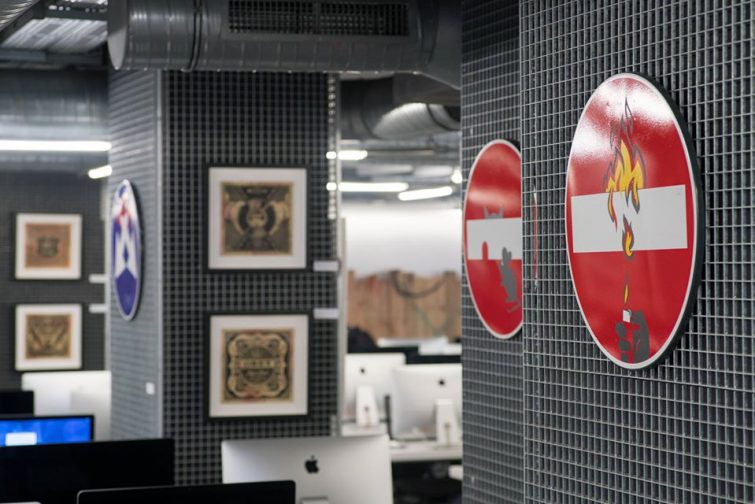 The street in Paris is not only admired outdoors! You can discover the urban art of the capital in galleries and museums. We therefore recommend Art42 located in the 17th arrondissement. This establishment is the first French urban art museum!

Many other galleries also offer street art exhibitions in Paris. Among them, one can cite the Open Space, the Artistik Rezo the Cabinet of amateur and the gallery Magda Danysz. All are located in the 11th arrondissement. You can also take a trip to Itinerrance in the 13th arrondissement, or to Wallworks in the 10th.

Finally, and this might surprise you, there are also exhibitions on Street art at the Louvre! If you were hesitating to visit this Parisian cultural gem, you now have a good reason to go.