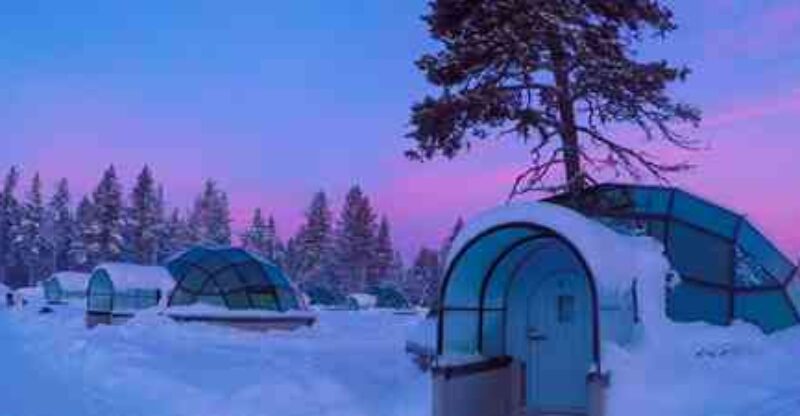 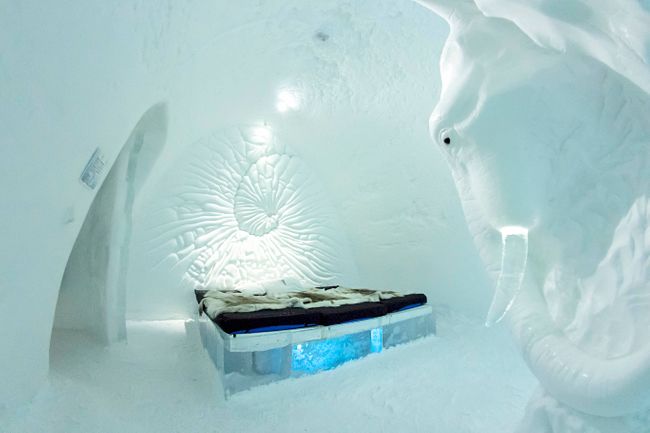 The original, biggest and probably coolest of them all. In Jukkasjärvi, the ICEHOTEL’s innovative approach has been encouraging visitors to embrace the cold for 30 years. And its latest idea now means you can sleep in an ice-made room any time and any day of the year. Kept cold by a refrigeration unit, ICEHOTEL 365 offers the best of both worlds. Enjoy summer activities in the Arctic Circle by day and escape to your own winter wonderland by night.

For a more traditional experience, stay in the original hotel, which melts and is rebuilt by ice sculptors from all over the world every year. No two designs are the same, and anything from unicorns and elephants to people and monsters could be looking down at you while you drift off to sleep on a bed made entirely of ice. But don’t worry about getting frostbite: there are cosy thermal sleeping bags and reindeer hides to keep you warm.

During your stay, you can also enjoy outdoor activities, drinks in Ice Bar, and a look around fantastic art exhibitions. The ICEHOTEL is also within easy reach of Abisko – one of the best places in the world to see the northern lights. The twinkling bar at the Hotel of Ice (Shutterstock)

Take a cable car deep into the Fagaras Mountains to reach this secret ice-built retreat, and choose between a double room for two people or an igloo. Both are made with ice from the largest glacial lake in the mountains, decorated with hand-sculpted furniture and come with animal fur, blankets and pillows.

Even the plates in the restaurant are made from ice, and there is also a church for couples who want to tie the knot. The nearby medieval towns of Brasov and Sibiu are worth exploring, with their beautiful cobbled streets and resplendent architecture. 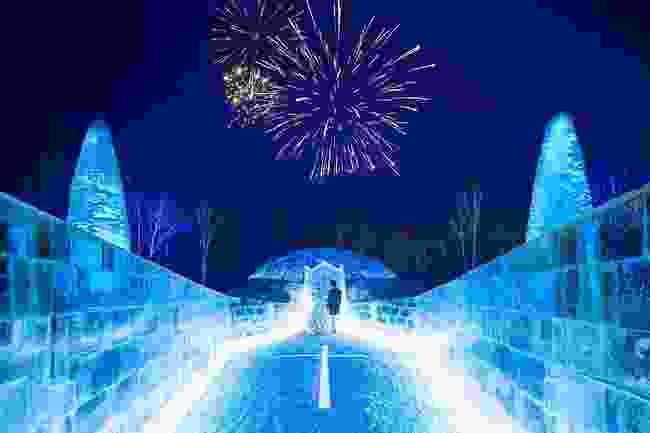 Between mid-January and the end of February each year, visitors to the Hoshino Resorts Tomamu in Hokkaido may be lucky enough to spend a night in the Ice Hotel. The sub-zero dome is just eight metres wide and four metres high, so there’s only space for one room. Guests are given a shruff (sleeping bag) to keep cosy at night, and a bowl of soup for breakfast.

But staying here is by no means a remote experience. The hotel is part of a larger winter world – the ice village. Here you can watch weddings in the ice church, eat cheese fondue in the frozen café, whizz down the ice-carved slide, skate on the ice rink and curl up by the fire in the library. 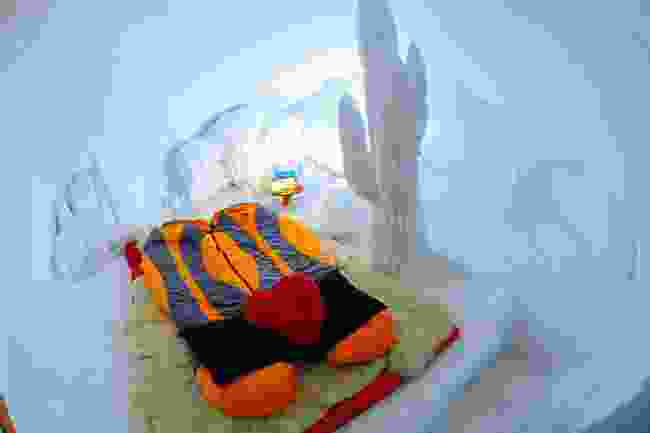 Set up by an extreme snowboarder who wanted to be the first person to ride the soft powder in the morning, Iglu-Dorf now has igloo villages in seven locations: five in Switzerland and two elsewhere. At the Zermatt village, you can lie in a whirlpool and gaze at the Matterhorn, while at Zugspitze you can look down on Germany, Austria and Switzerland from one viewpoint. The freshest one of the lot is in Innsbruck, Austria, which can be reached on skis and snowboards. At over 2,600 metres above sea level, there is even a ‘thrill walk’ to the igloo restaurant.

Back in Zermatt, there is a plethora of hotel rooms to choose from, from a basic ‘Family & Friends Igloo’ that houses up to six guests with sleeping bags, to more luxurious suites that are decked out with artwork, hot tubs and private bathrooms.

In 2016, Iglu-Dorf achieved the world record for the largest ever igloo to be built. The igloo dome in Zermatt had a diameter of 12.9m and a height of over 10 metres. It took 18 people, three weeks, and around 1,400 blocks of ice to build. 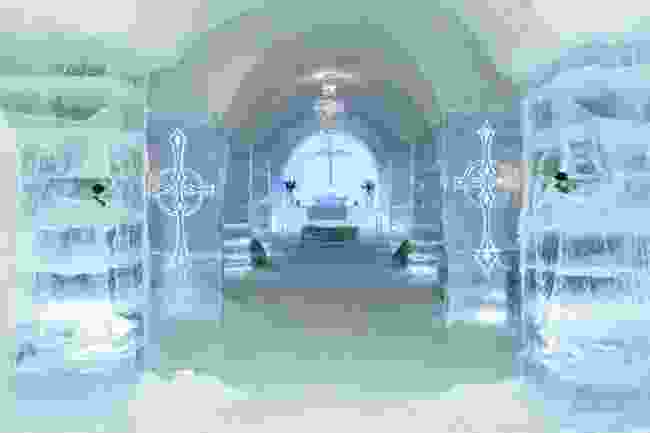 The northernmost igloo hotel in the world, Sorrisniva Igloo Hotel, has come a long way since it opened with just six rooms 20 years ago. The frozen spectacle in the mountainous pine-covered Sorrisniva now comprises 26 bedrooms, four suites, a chapel and an ice bar – all lavishly decorated with hand-sculpted art.

Every year is a new theme for the hotel, and in the past, the ice walls have been carefully carved away to reveal Vikings, mythical creatures, Nordic legends and arctic wildlife. Step outside and you may be lucky enough to see mother nature’s best art display too, as the hotel is in a prime location for viewing the northern lights.

An Arctic Wilderness Lodge, 24 suites, will open year-round in 2021. One of the intricately-carved hotel suites (Shutterstock)

Around 20 million kilos of snow and 350,000 kilos of ice are re-designed every year to create the ever-changing Snow Village in Finland. In previous years, the snow suites, chapel, ice restaurant and bar have been decorated with a Game of Thrones-inspired characters and sculptures.

The impressive snow suites drop to lows of minus five degrees Celsius to prevent the gigantic sculptures from melting. If you fancy something a little warmer, opt for a cosy cabin. There are plenty of outdoor activities to get your blood pumping too, such as dog-sledding, cross-country skiing, snowshoeing, northern light trips and ice-sculpting classes. 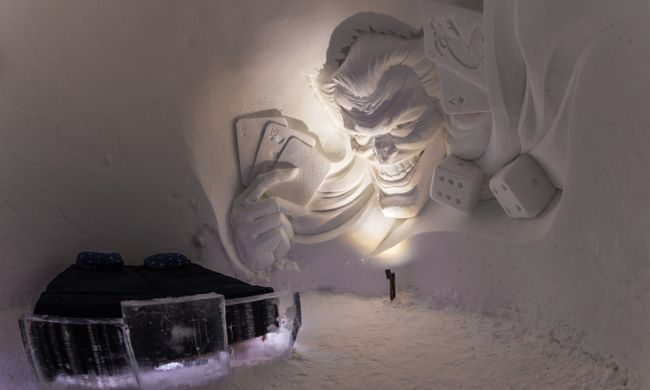 Every year, the sparkling Snowhotel Kirkenes melts back into the Arctic Fjord, seamlessly re-joining the natural world that surrounds it. When the colder temperatures return, so does the hotel, with ice sculptors from around the world bringing its 14 rooms and ice restaurant back to life.

Each year brings a new motif, but the sculptures never lose their Nordic touch. The artwork of every room is different, but they all share the same intricate detail – so you will never tire of studying the ice sculptures as you drift off at night.

Warm-up in the restaurant at dinner, then slink off to your room. With romantic suites designed for honeymooners alongside bigger spaces carved out for families, there’s something here for everyone. The candlelit restaurant inside the Arctic SnowHotel (Shutterstock)

Not only is Rovaniemi home to Santa, but winter is made all the more magical by the Arctic SnowHotel that pops up here every year. The cave-like entrance leads to various snow-lined tunnels covered in ice carvings; the bedrooms hold solid, see-through ice beds draped in reindeer furs; the candle-lit restaurant serves traditional Finnish food such as roasted elk, and the outdoor Jacuzzi is a great place to relax in nature. For a real treat, relax on a warm wooden bench in a sauna made from ice, then stay in one of the suites: you will feel like you’re in your own frozen palace.

There’s plenty to keep you busy outside the hotel – such as snowshoe hikes, snowmobile safaris, snow sculpting, ice fishing, and visits to local homes to learn more about life in Finnish Lapland. You can also request an ‘aurora alarm’ to make sure you don’t miss an appearance of the northern lights. 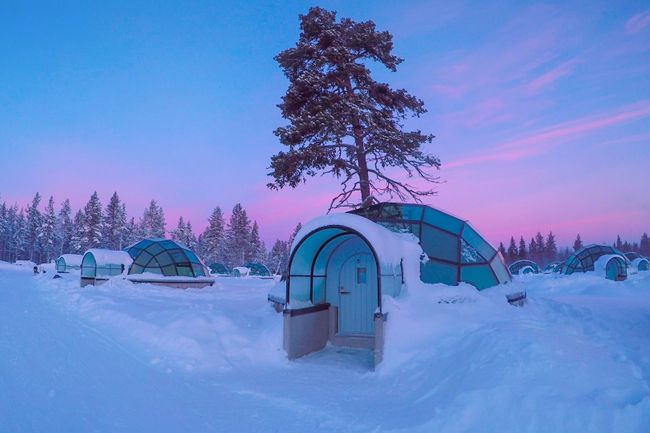 On the edge of one of Finland’s largest national parks, Urho Kekkonen, is Kakslauttanen Arctic Resort. Along with log chalets, glass igloos and a traditional house, you’ll also find accommodation for more adventurous visitors.

Snow igloos are nestled under snow-sprinkled pine trees. Armed with a down sleeping bag, you’ll spend the night tucked up in one of these snug shelters, protected from outdoor noise and in temperatures as low as minus six.

Popular daytime activities include husky, reindeer and horseriding safaris, while after dark you can take a snow tank safari – on which you can see the northern lights. 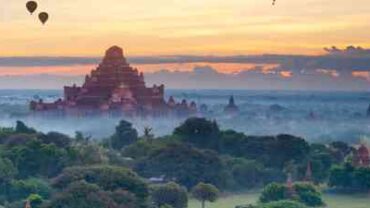