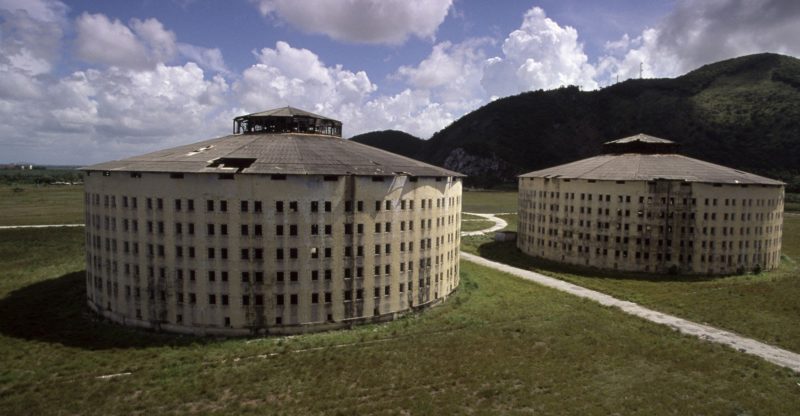 Peeling paint, walls dripping with condensation and windows with shattered glass – there’s something very eerie about an unlived-in building. From discarded hotels to ghost towns and flooded villages, we’ve rounded up some of the spookiest abandoned places in the world, for intrepid travellers with a macabre sense of adventure.

Once the world’s most expensive prison, from 1829 this Philadelphia facility boasted grand architecture, modern luxuries and notorious inmates including Al Capone. One of the first penitentiaries every built, it combined impressive design and strict discipline to inspire regret and reform in the hearts of convicts. Since its closure in 1971, the complex has crumbled into a mass of deteriorating cellblocks, which are now recognised as a National Historic Landmark. Eastern State Penitentiary is open to visitors year round.

Eastern State Penitentiary in Philadelphia, where Al Capone was an inmate

The formerly luxurious Lee Plaza Hotel stands windowless and exposed. It is just one of Detroit’s many abandoned places that mark the shocking decline of a major American city. Once at the centre of a booming motor industry, the successive blows of economic recessions, competition from overseas and race riots chipped away at Detroit’s early prosperity. A staggering 60% of the city’s peak population has now moved away, leaving behind a living example of urban decay.

Lee Plaza hotel in Detroit has lost its former grandeur

Eccentric and extravagant, this Victorian mansion in California is a maze of dead-ends, secret doorways and stairs that lead to nowhere. Driven by paranoia and superstition, the Sarah Winchester, widow of gun magnate William Wirt Winchester began building in 1884 and ordered that construction should never cease. In the 38 years until her death, the residence mushroomed into a labyrinth of architectural oddities seven storeys high. Although damaged in the 1906 earthquake, the house is open to visitors who can explore the 160 surviving rooms.

Winchester Mystery House, one of the few abandoned places in this list that is open to visitors

Settled by prospectors lured by the California Gold Rush in the mid-1800s, Bodie became a booming mining town of fortune-hungry men, saloon shootouts and barroom brawls. Its fortune was short-lived however. By the 1890s gold strikes elsewhere had drawn the crowds away, causing the population to dwindle. Frozen in time, this ghost town became a National Historical Landmark in the 1960s. Now, tourists, not miners, flock here to walk the deserted streets and admire the town’s arrested decline.

Bodie California – a town forever frozen in the 19th century

An urban museum of corroding classic cars, dilapidated high-rise hotels and shop fronts boasting the latest in 1970s fashion: for the deserted Varosha quarter in Famagusta city, time froze in 1974. Following the Turkish invasion of Cyprus, Varosha’s inhabitants were forced into a life of exile. Once a favourite destination of the rich and famous, people today can only peep through barbed wire as nature reclaims the buildings.

Varosha, where the abandoned places along the beach were once luxurious homes and hotels

Unoccupied, unopened and never finished, the 105-storey shell of the Ryugyong Hotel is a scar on Pyongyang’s skyline and North Korea’s pride. Construction on the hotel began in 1987 but stopped after five years due to a lack of funds. Once proudly emblazoned across North Korean stamps, this vacant hotel soon became airbrushed out of official photos. Despite nearly two decades of abandonment, construction resumed in 2008 but whether the hotel will ever be completed is open to debate.

Defiantly protruding from a desolate landscape of ash and lava, this church tower is all that remains of the devastated village of San Juan Parangaricutiro, Mexico. Beginning in 1943, successive eruptions of the Paricutin volcano slowly engulfed houses, streets and livelihoods, masking all signs of life under a black cloak of molten rock and ash. Today, tourists drawn to this isolated ruin can marvel at the still intact, though vacant, altar inside.

Boldly rising 75 metres above the waterline, the bell tower of the flooded St. Nicholas Church marks the site where the Russian town of Kalyazin once stood. When the Uglich Reservoir was created in 1939, the town was purposely flooded, and the landscape was irreparably altered. Attracted to the simplistic beauty of the remaining belfry, tourists visiting on boats can explore this enduring landmark of the sunken town.

The town of is Kalyazin was flooded to create a reservoir

Hidden sixty metres below the streets of Moscow lies ZKP Tanansky, a 7,000 sq metre space which once served as a secret Cold War–era communications centre. Built in the 1950s, this vast complex was designed to withstand a direct nuclear attack and filled with enough supplies to stay running for months afterwards. Since its declassification in 1995, Bunker 42 has drawn many visitors keen to delve into the secrets of the past.

Empty since 1967, this “Model Prison” still radiates desperation and paranoia. Commissioned in 1926 by dictator Gerardo Machado, and inspired by the Panopticon model, its oppressive architecture was designed to create a sense of constant, invisible monitoring. Even though Fidel Castro was once an inmate here, under Castro’s government the prison’s population ballooned to over 6,000 “enemies” of the state. Now a museum, visitors can experience the forbidding atmosphere still present in these echoing corridors and vacant cells.

Fidel Castro was once an inmate at Presidio Modelo in Cuba

Jutting out of the waters of the Thames Estuary, The Maunsell Forts slowly rust away. Built in 1942, these offshore fortified towers were designed to provide anti-aircraft fire during the Second World War. After they were decommissioned in the late 1950s, a number of the structures were re-occupied by pirate radio stations. However, for the past three decades the forts have stood abandoned and largely ignored.

The Maunsell Forts – these eerie, abandoned places lie three miles off the coast of Kent

Empty and unfinished for nearly two decades, this failed energy project in South Carolina got a new lease of life in 1987 as an underwater film set for science-fiction thriller The Abyss. Forgotten once again after filming finished, the sets were left on the site until they were finally demolished in 2007. However, there is hope on the horizon: a new power plant is due to be built adjacent to the old structure.

A vast stretch of snow-covered bleakness, this Ukrainian city has been deserted since the Chernobyl nuclear disaster  in April 1986. In just four hours, Pripyat’s entire population was evacuated, and with radiation remaining too high for human habitation, the people never returned. Among the overwhelming sense of abandonment, the most iconic reminder of the disaster is a rusting ferris wheel in an amusement park that was due to open just days after the accident took place.

A maze of cracked concrete, crumbling plaster and snapshots of frozen lives, Battleship Island in Japan resembles a long-forgotten war zone. It was deserted overnight after the closure of its coal mine in 1974. Fallen facades of buildings expose abandoned places littered with reminders of their inhabitants: shoes remain where they were kicked off, half-read newspapers litter the floor and once-loved posters slowly peel off bedroom walls.

A rotting carcass of deserted corridors and empty patient wards, this military hospital in Berlin once housed German and Soviet soldiers, but has been largely unused since the late 1990s. Derelict it may be, but it has not been entirely abandoned; empty bottles and rubbish scattered on the ground hint at the disparate groups of opportunistic looters. Weekend wanderers, curious travellers and inspired photographers are drawn to the decayed aesthetic of this moribund site.

The unnerving surroundings of the Beelitz Military Hospital in Berlin

16. The last of our abandoned places: Balaklava, Ukraine

During the Cold War this top-secret submarine base was a hive of activity. Hidden in the hillside and designed to withstand a direct atomic attack, this giant underground complex once housed a fleet of Soviet nuclear warheads and submarines. Once so secret that the surrounding town of Balaklava had to be erased from maps, today, visitors can explore the maze of dark winding canals that make up this now deserted site.

Visitors can explore the subterranean canals at Balaklava by boat 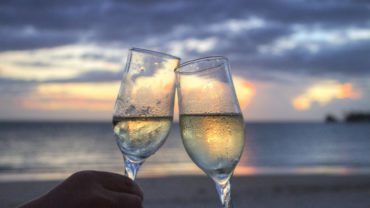