Europe’s national parks are the most idyllic places to visit if you’re in search of a peaceful retreat. The continent is filled with famous beauty spots and spectacular scenery, where everywhere you look resembles a picture-perfect postcard. Rocky mountains, rolling hills, sleepy valleys and vast calm lakes make for thrilling outdoor adventure.

Hiking and climbing enthusiasts will be in paradise, as will water sports junkies who can make the lakes their own. If you’re not into sports, the National Parks lend themselves well for relaxing weekend breaks to get away from busy city life.  Take a breather to appreciate the beautiful nature, slow pace of life and cosy local restaurants. We often get so caught up in urban life and travelling in big cities, that we forget to explore nature’s very best gems.

We seriously appreciate the outstanding natural beauty on offer in Europe. So here is our roundup of Europe’s most beautiful National Parks. In no particular order… 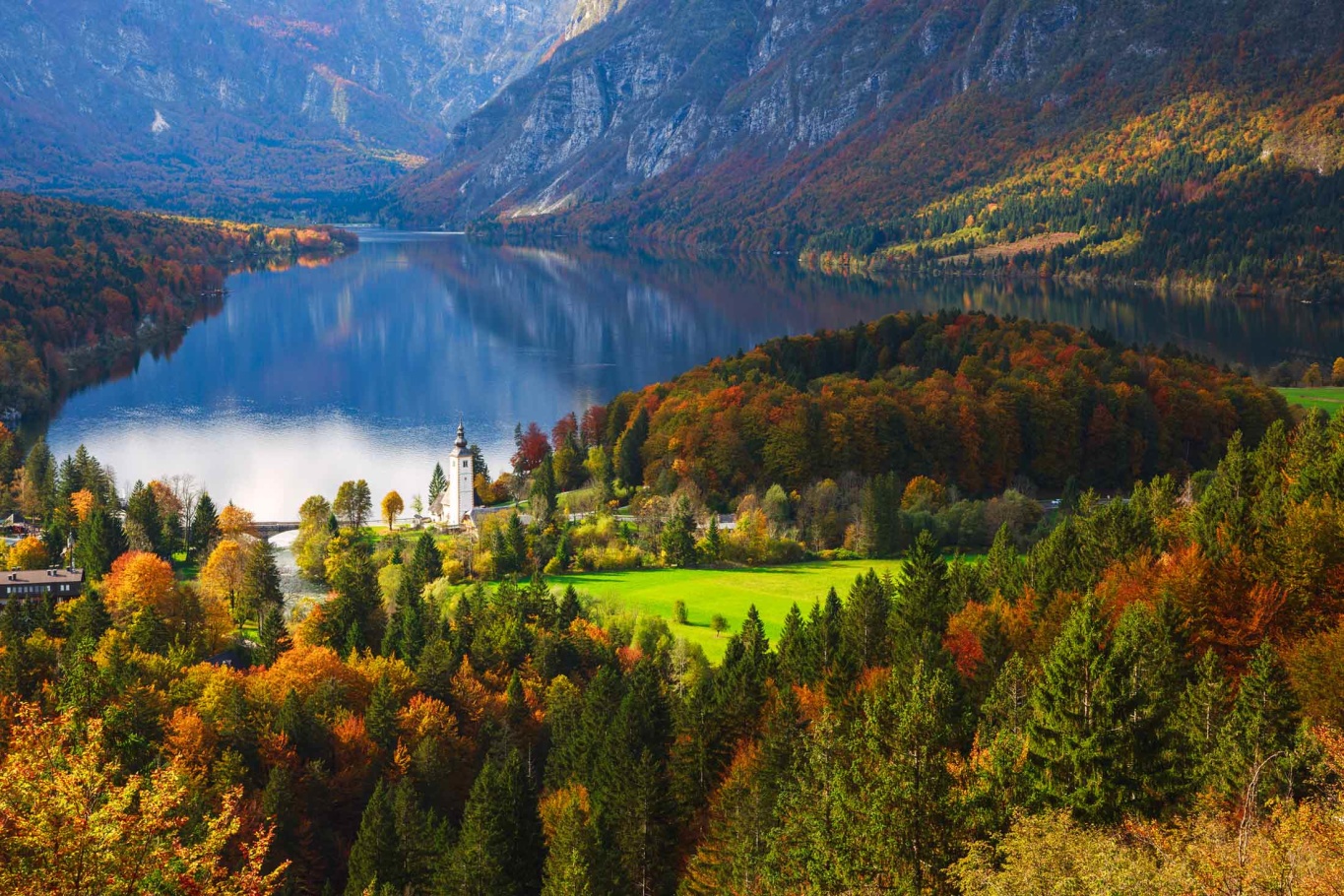 Tourists flock to Slovenia to dip their toes into the beautiful Lake Bled, but many tend to miss what arguably is the country’s real jewel of the Julian Alps: Triglav National Park.

Take a step back from the famous castle in the lake and check out the jaw-dropping views of the country’s largest protected area and one of Europe’s oldest parks.

Swim in or kayak on the crystal-clear, turquoise waters of Lake Bohinj, hike the countless trails up and down the peaks and visit incredible waterfalls along the way – Savica Waterfall and Pericnik Waterfall being the most notable. Triglav is a truly authentic part of stunning Slovenia that Lake Bled can’t offer on its own. 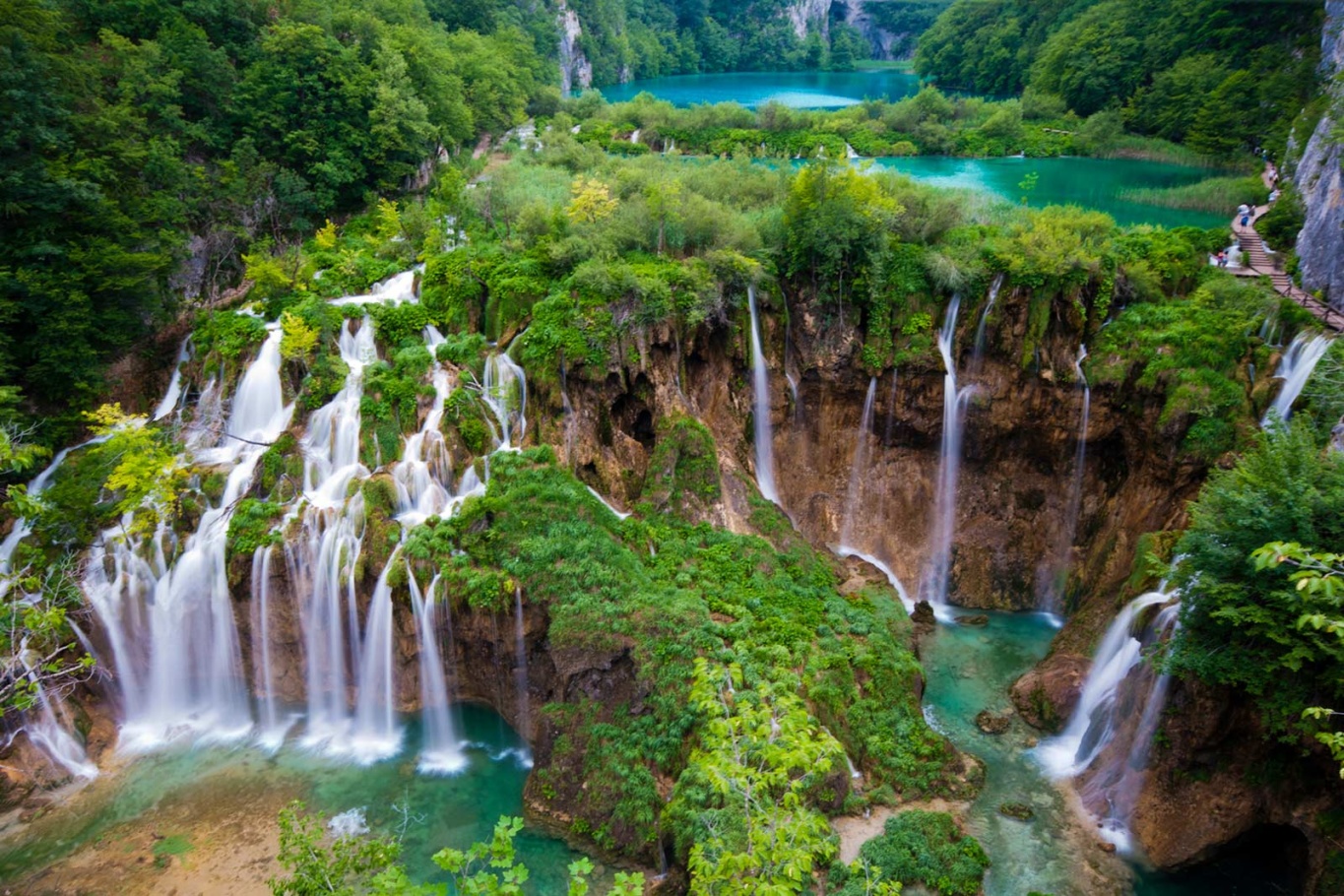 Plitvice National Park has been one of Croatia’s main attractions for a while now. People hear about and see photos of the magnificent layers of waterfalls that pour into emerald lakes and just need to go and see it for themselves!

Within dense woodland inhabited by rare birds, boars, wolves, bears, deer and more, Plitvice is a UNESCO World Heritage Site that’s made up of 16 lakes, each connected by multiple waterfalls. Unfortunately due to the park being SO beautiful, it does attract the crowds, so expect to queue (especially at the best photo spots) and definitely don’t expect to have the paths to yourself.

However tempting the water may look, swimming is actually forbidden in all areas of the park. If you’re really after a dip in a natural pool, Krka National Park is also beautiful and is about 2 hours away from Plitvice. 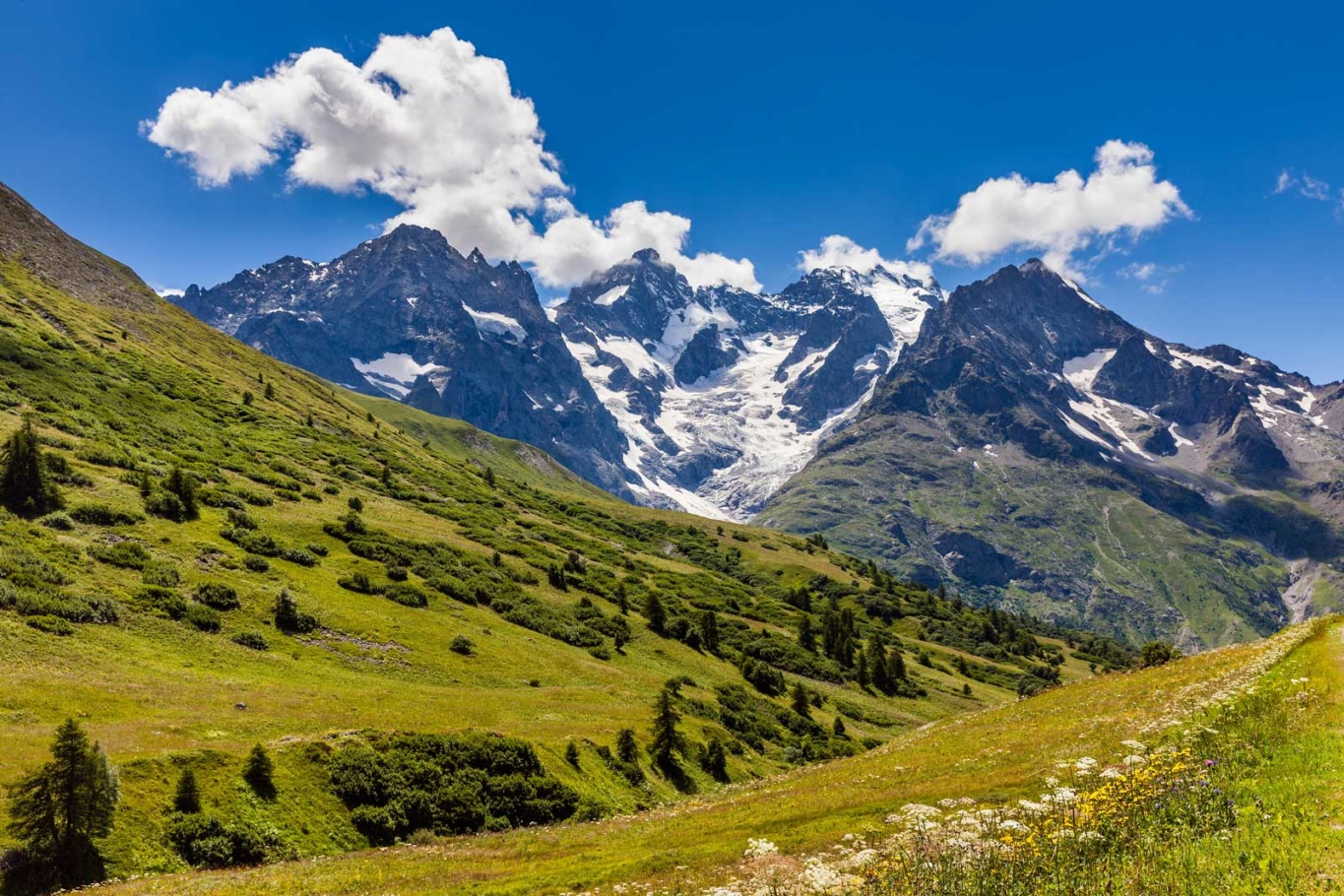 Of the 10 national parks in France, hikers, climbers and nature-lovers come to Ecrins National Park in the heart of the French Alps for the mountainous views and unreal scenery.

Ecrins is so huge (though not the biggest of France’s protected parks) that within it lie over 100 mountain peaks and 60 lakes. While in summer hikers of all levels can enjoy more than 700 km of hiking trails, in winter the park is more popular for its 776 km of ski slopes. Whatever the season, the views you’ll come across in Ecrins will be sure to take your breath away. 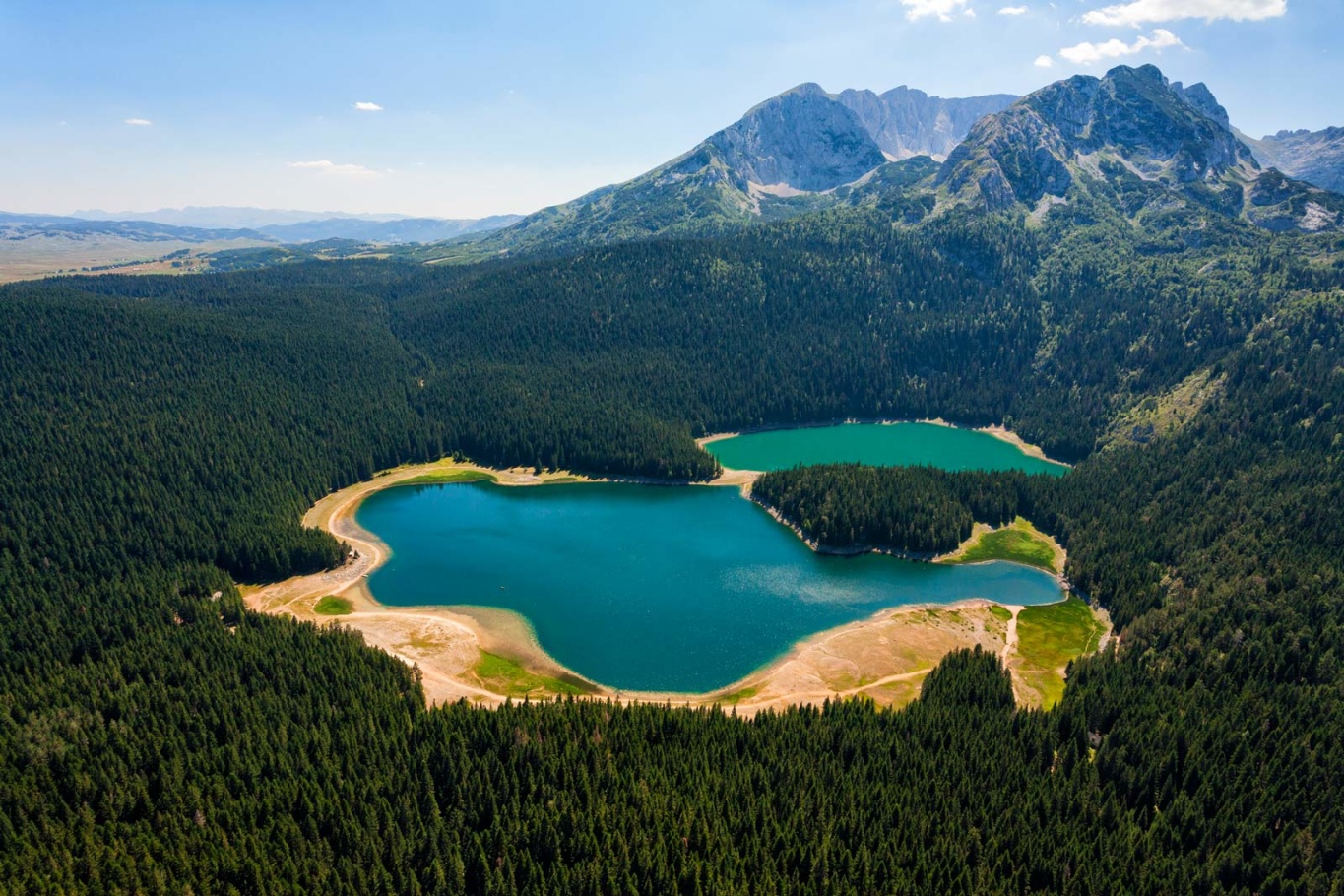 Durmitor National Park in northwestern Montenegro is a dream for adrenaline junkies. Keen free climbers, rock climbers, base jumpers and abseilers all head here for some of Europe’s best mountain activities.

However, it’s not only the thrill-seekers that can enjoy Durmitor as there are plenty of scenic walking opportunities and hiking trails that are truly breathtaking.

Durmitor is made up of 48 limestone peaks, dense pine forest that opens out into glistening glacial lakes plus huge, impressive canyons – The Tara Canyon being the most famous, especially for being such an incredible place to go rafting. If you’re heading to Montenegro, make sure Durmitor gets at least a day on your itinerary. 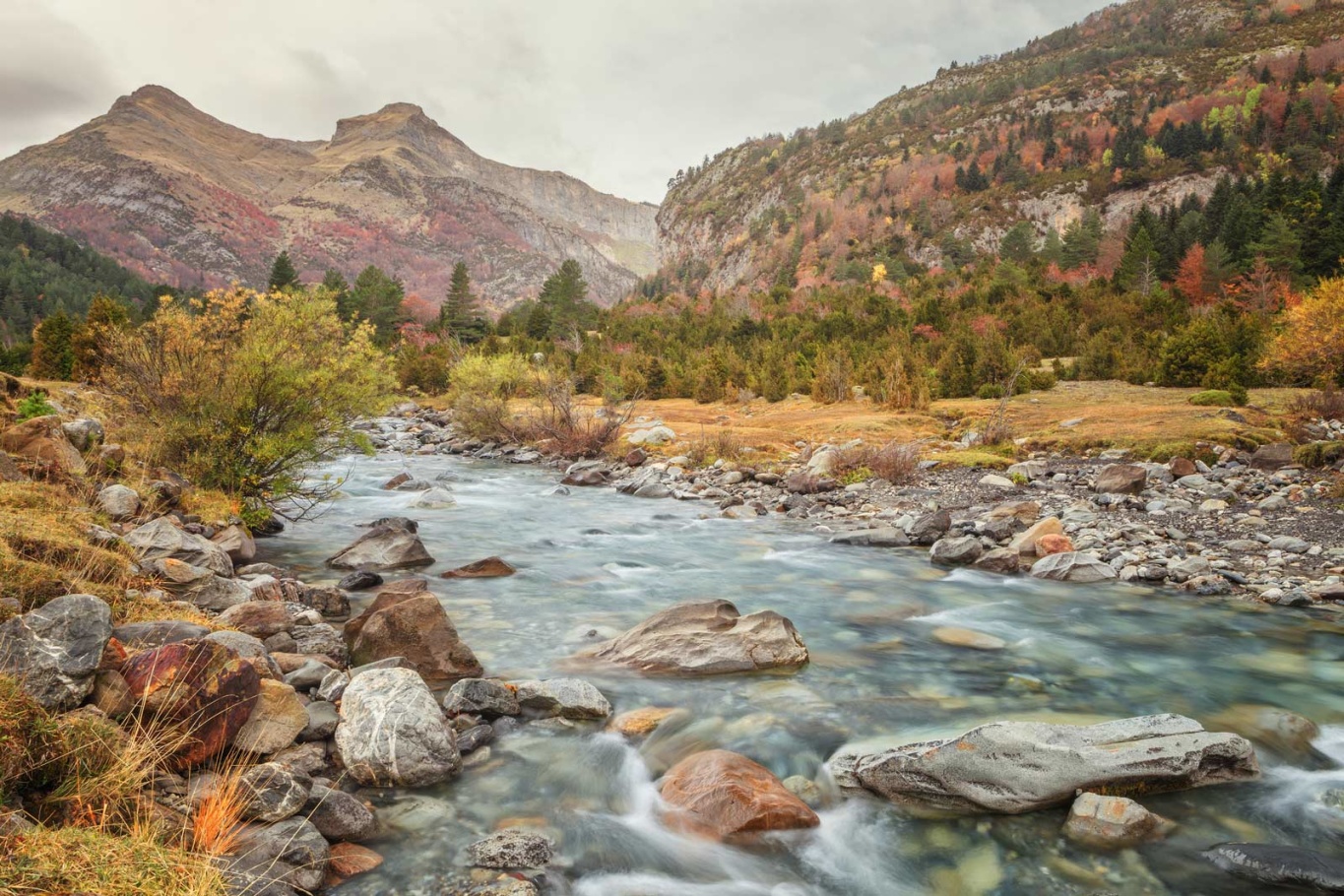 Spain’s stunning Ordesa and Monte Perdido National Park is situated in the Pyrenees of the Huesca province in Aragon. Monte Perdido, or ‘Lost Mountain’ in English, is the most dramatic of this park’s peaks – towering at 3,355 metres high with valleys of 3 kilometres deep, it’s not only the highest in Ordesa but the highest limestone summit in Europe.

Ordesa is the perfect place for hikers of every level to take in some awesome views over the Bujaruelo Valley, and it’s so beautiful that some even compare it to the Grand Canyon and Yosemite. Waterfalls, streams, green woodland and unbelievable views are in abundance at this park, and the vast flora, fauna and wildlife just add to its beauty. 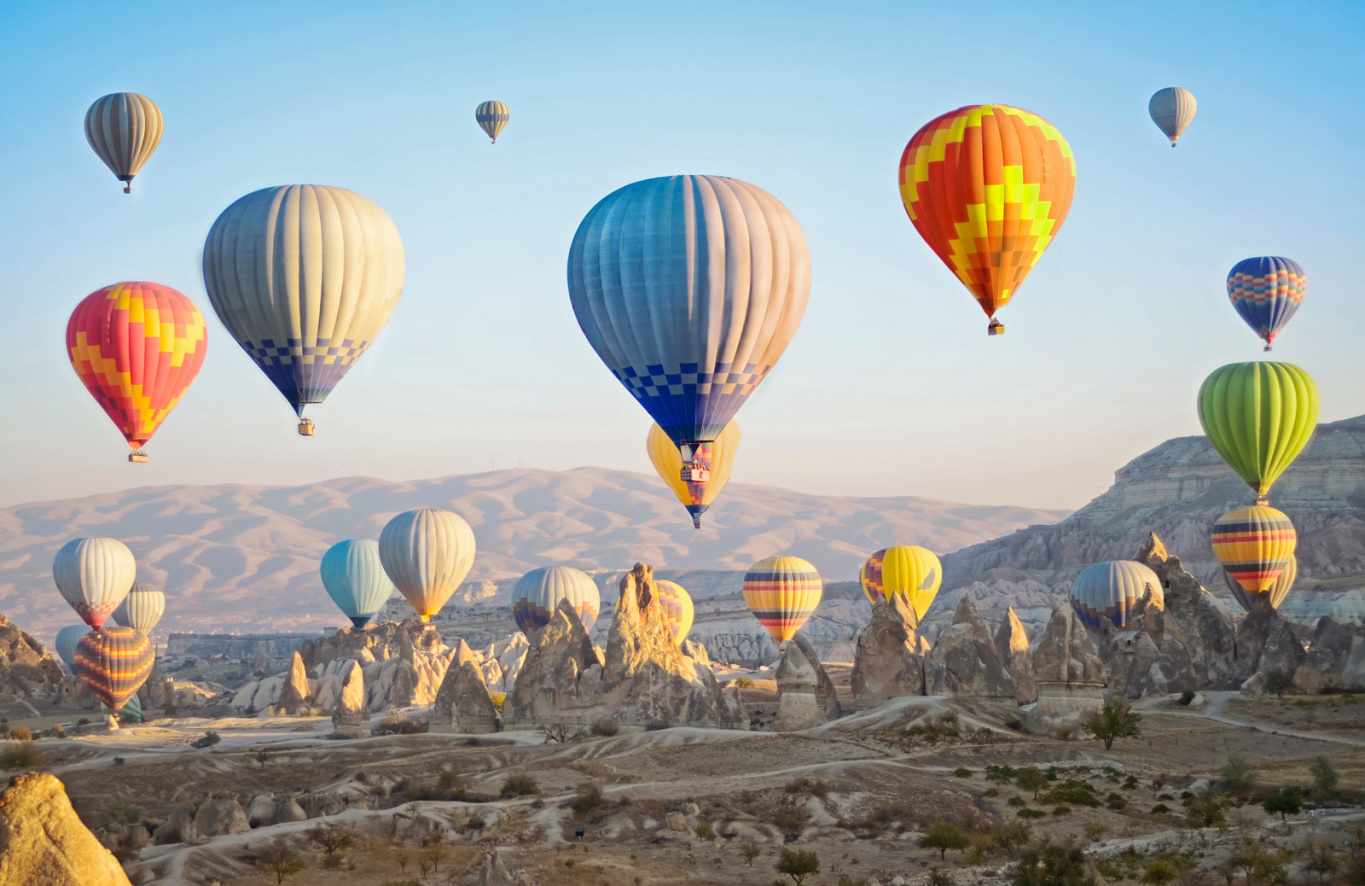 Goreme’s unique and mind-boggling rock formations are without a doubt what makes it stand out from the rest of the national parks on this list. The rocks, known as “fairy chimneys” are the defining feature of Goreme National Park ‘and the Rock Sites of Cappadocia’ (as it is officially named by UNESCO), and were created by the cultural heritage of Goreme’s inhabitants as early as the third century.

Take a hot air balloon ride over the vast park, looking out over the plains, hills, streams, valleys and fairy chimneys – an absolutely incredible experience if you are ever fortunate enough to discover this area of Europe. 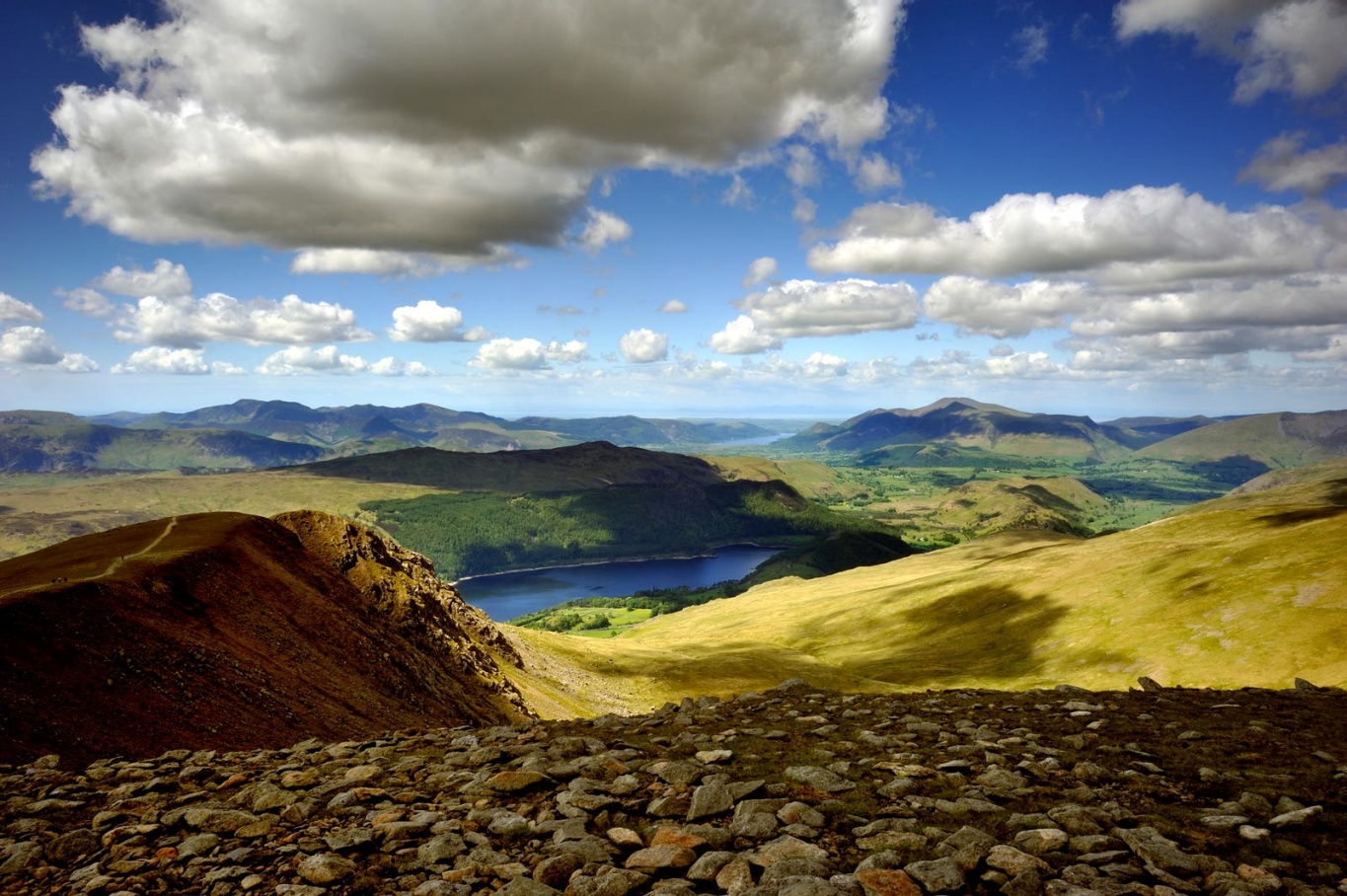 There’s a reason the Lake District is the most visited national park in Britain. It’s not only the largest protected park in England but the views you are rewarded with once you’ve climbed even the least strenuous peaks will be etched into your memory forever.

The Lake District is made up of 16 main lakes as well as its mountain peaks and hills, making it the ideal getaway for hikers, climbers as well as watersport fans and keen fishermen. Lake Windemere is the most well-known of the lakes.

You could spend days or weeks exploring the Lakes and you’ll more than likely still want to stay put and do more. The park’s quaint, old English villages, glacial lake views and countless activities are what attract the millions of visitors, and the season doesn’t even matter. 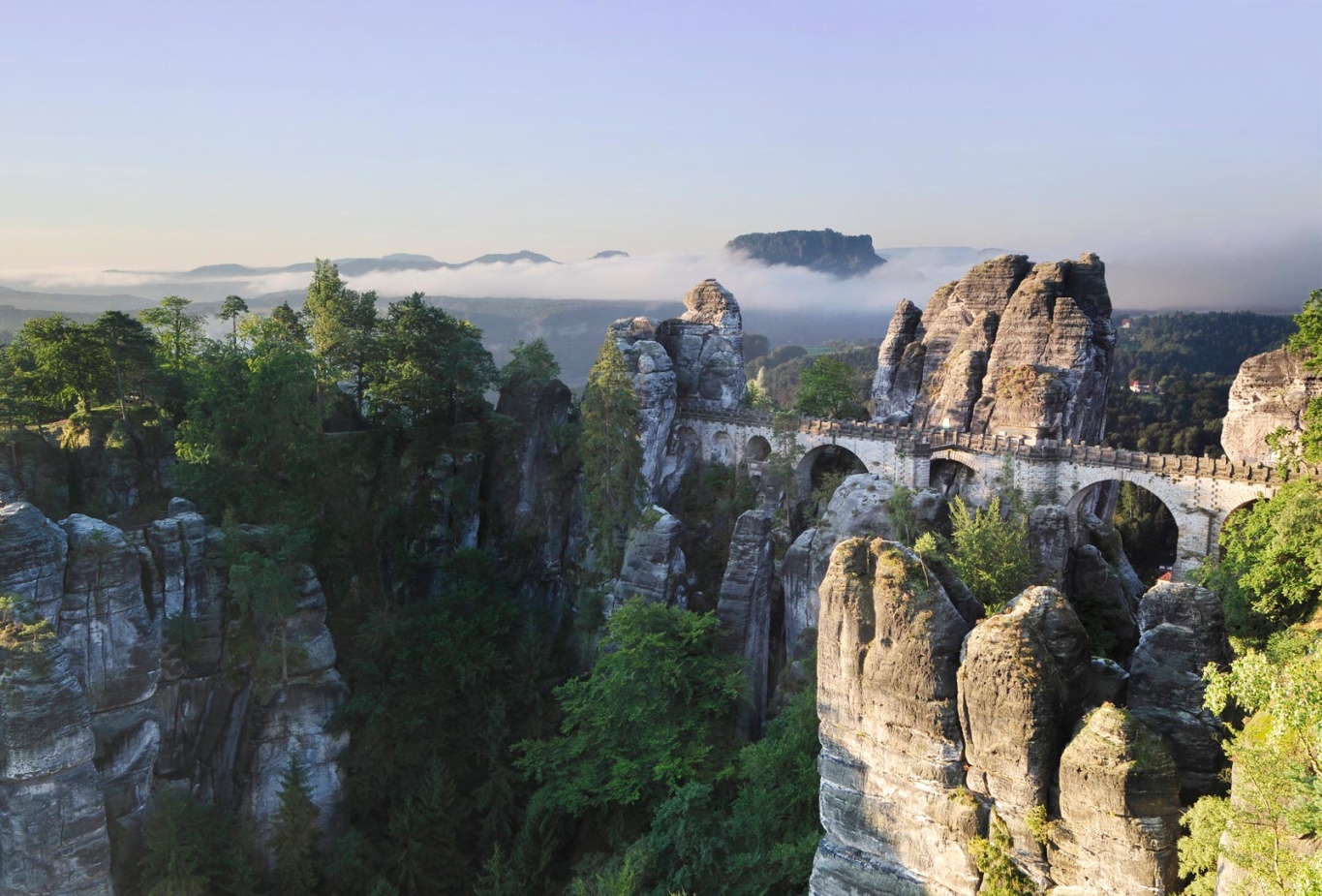 Bordering the Czech Republic, East Germany’s Saxon Switzerland National Park is one of the country’s real gems. Chalky sandstone cliffs, deep valleys, gorges and table mountains are just some of the jaw-dropping features of Saxon Switzerland.

The Bastei and the Bastei Bridge are the most-visited parts of the region which many people see as a day trip from Prague. The unique rock formations, which also form a bridge, stand in front of one of the most amazing, panoramic views in the park – not a point to be missed if you ever get to visit Saxon Switzerland. 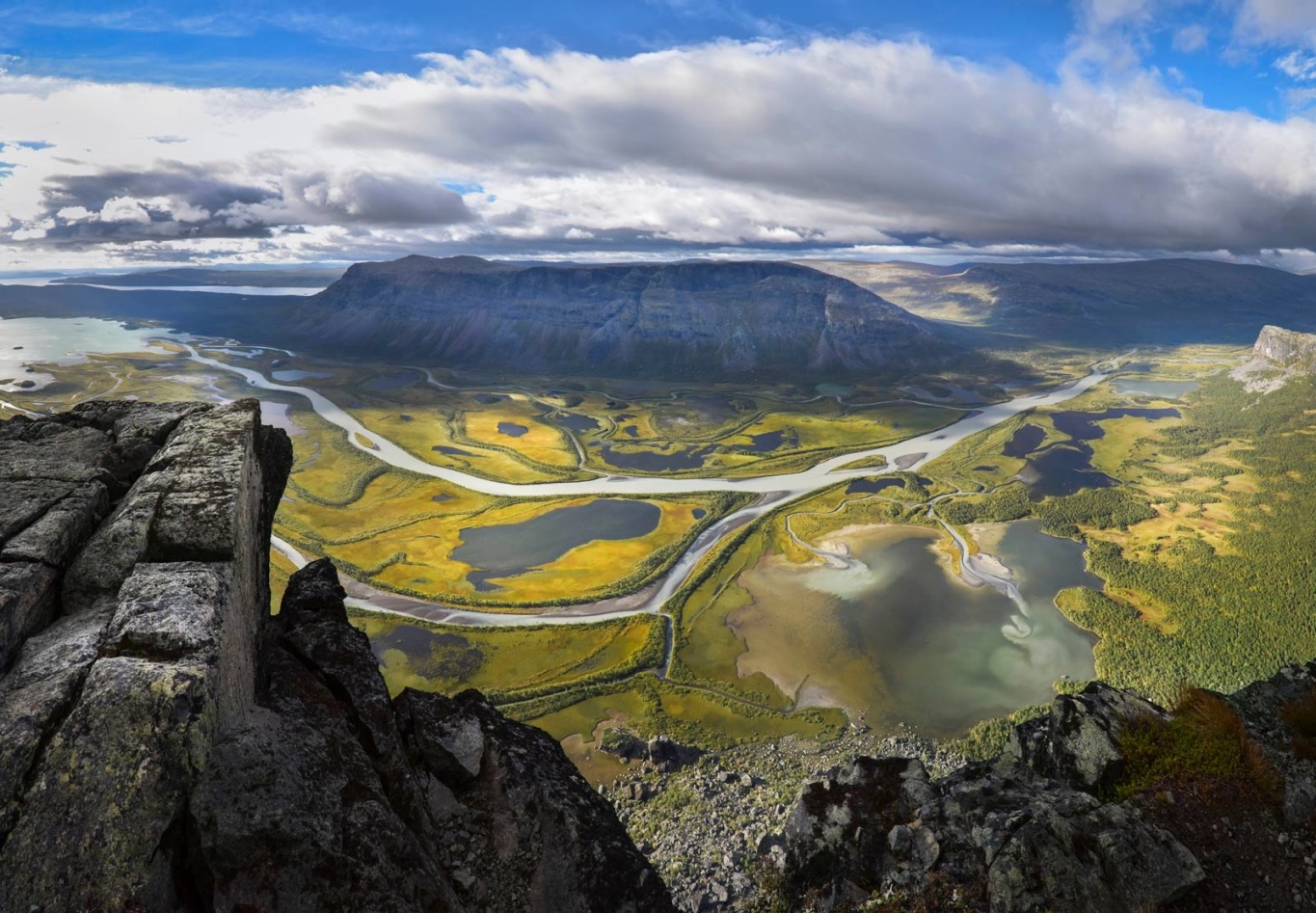 Hands down the most spectacular of Sweden’s many national parks, you just need to see pictures of Sarek to see why (and even they don’t do the place justice).

This Swedish national park isn’t an easy place to get to, but if you do your research and manage to make it to see the nearly 100 glaciers flowing all over the park and the amazing Rapa Valley with its 2000 metre high mountains, it’s a special sight to see.

Sarek sits in the Norrbotten province of Sweden which is within the Arctic Circle, so there’s even a chance you could witness the northern lights. Indigenous people have inhabited the park for as long as anyone can remember, using the valleys and mountain slopes as grazing land for their reindeer. Moose, arctic foxes, lemming, brown bears, wolves and even lynx are all part of Sarek’s diverse ecosystem. 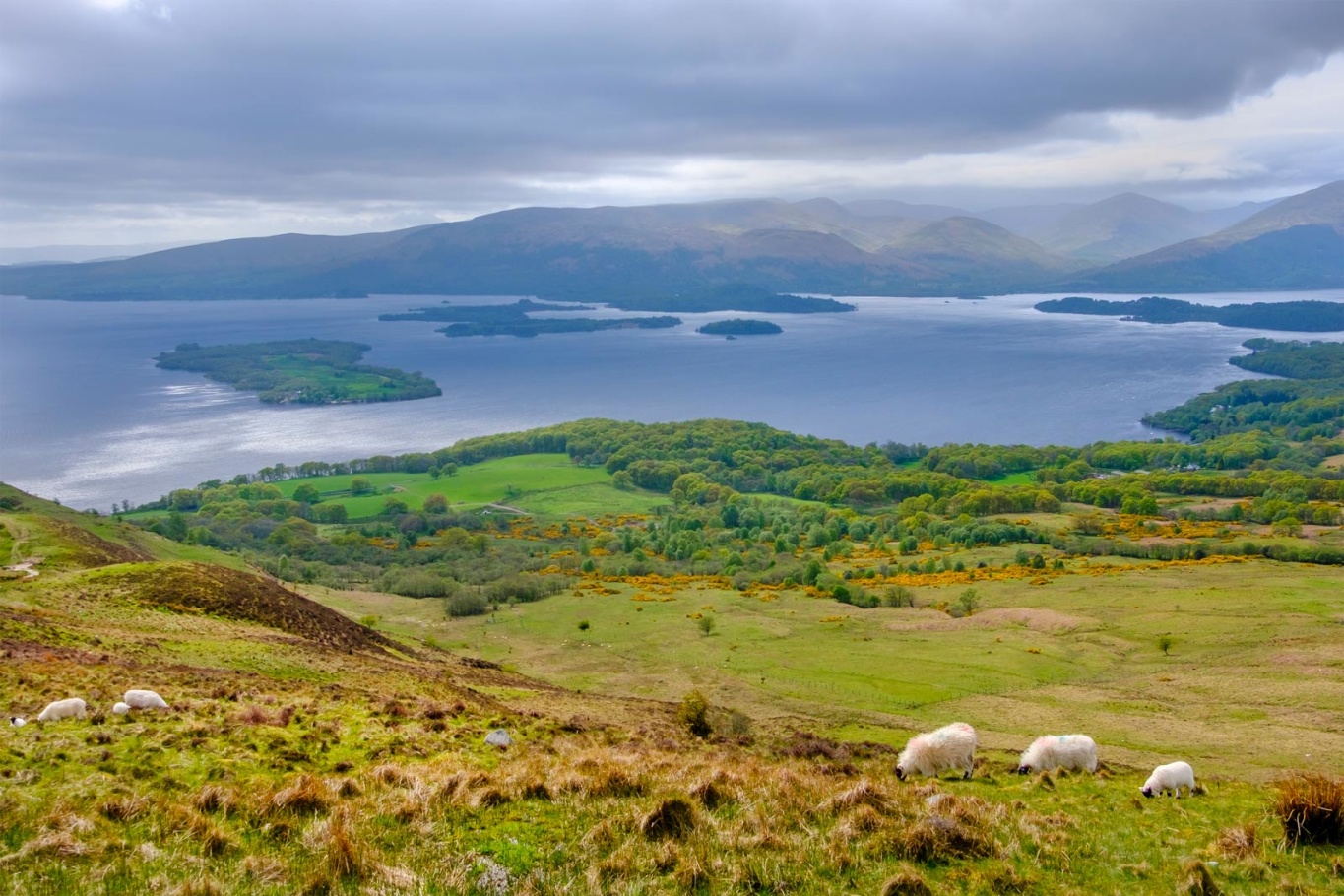 Loch Lomond and Trossachs National Park is home to the biggest lake (or loch) in Great Britain, making this outstanding space an adventure seeker’s playground.

On the lake, you can make the most of water sports such as kayaking, canoeing and jet skiing. Cruise on the water and admire the peaceful scenery of the Arrochar Alps. You’ll struggle to find a more beautiful lake in the United Kingdom. This is the first area of natural beauty in Scotland to be made a National Park by the Scottish Parliament.

Surrounded by breathtaking views of snow-capped mountains, this national park has highlands just as impressive as the lowland. Perfect for hikes, explore the wooded valley and get higher and higher for spectacular views of the calm water of Loch Lomond below. Rocky peaks, glens, lush woodland and sleepy forests make this national park one of our favorites in the world.